"There is no such meaning as life to me! This is my mission!"

―One Zero proclaiming her pride as Exceller's servant.

None, programmed as female

Moga Mogami
Android One Zero (アンドロイド・ワンゼロ Andoroido Wan Zero) is a remodeled Heisei/"modernized" version of the original Zero One android (Ultraseven) that appeared in Ultraman Ginga S. She was a servant of the Alien Chibull, named Exceller. However in the middle of the series, she redeemed from her past acts and joined the UPG, renamed as Mana (マナ, Mana).

In Ginga S, Mana, as Android Zero One, initially presented herself as cold and emotionless robotic servant of Exceller, viewing orders of her master as absolute commands that are not to be questioned. Overtime with her repeated failures and her time with Exceller however, coupled with her interaction with Sho and Misuzu, Mana begins questions her role and purpose to the epiphany. It was Misuzu who helped her realizing that she has a greater purpose than fighting. That, coupled with Exceller's abuse and rejection, eventually convinced her to switch side with Hikaru and his companions as means to atone her mistakes.

Android One Zero appeared in this short story. Though she only made a small physical appearance, her role was important in the story.

Set one year before Victory's debut, Android One Zero MonsLived into Nosferu and turn several humans into Beast Humans. Her actions would attract several humans into believing an ongoing paranormal activity occur. An environment protection group called "Mountain Peanuts" protected Nosferu from the UPG and Self Defense Forces, claiming it as a protected species, not knowing the danger it carried. Nosferu quickly attacked and used its Beast Humans as human shields.

"Don't even think you have won this time!"

Chigusa Kuno, whom just happened to be nearby was granted the Ginga Light Spark and transformed into Detton. However, having no experience with this monster, made her swap into Ultraman instead. Chigusa/Ultraman firstly used its Spacium Beam for thirty seconds but Nosferu survived and regenerate from the injury. She quickly fired Ultra Slash which ended up cutting Nosferu's arms though still able to resist the injury. In a last effort, Nosferu took the Mountain Peanuts leader as hostage but the other members freed him, allowing Chigusa/Ultraman to firstly fired his head with Slash Ray, followed by Ultra-Attack Ray, and Ultra Psychic attack. Android One Zero made it out safely, swearing revenge. Mountain Peanuts

She reappeared again a year later, as she was sent by her master to Earth to retrieve several Victorium stones it so that he can revive his master, Dark Lugiel.

On her missions, she was given the Chibull Spark where she "MonsLived" with Kaiju Spark Dolls to fight Ultraman Ginga and Ultraman Victory, but was defeated and had the dolls confiscated as well. Among the monsters are:

Near the end of the first half of the series, she was ordered by Exceller to raid and destroy the UPG Live Base. Leading an army of Chiburoids, she was about to goal when Arisa Sugita tracked her to the basement and shot her with a blast from her gun, rendering the android deactivated while her bomb was disarmed by Tomoya Ichijouji via the Gunpad. However, she reactivated later on and commence a self destruct mechanism. It wasn't long until Sho destroyed the bomb in her chest that she was seemingly truly defeated. However, she was still alive, though badly damaged she was to escape the base to witness Ginga and Victory's success against her master as Five King. With Exceller "dead", she was left without a master. Activate! Magnewave Strategy Fight to the Death of the Morning Glow

After repairing herself, One Zero rested at a field, remarking on her past services on Exceller and was chanced upon Misuzu, who began to bond with the android. Eventually they were met by Sho who had come to attack One Zero, believing she was still a minion of Exceller. The two attempted to run but were attacked by Chiburoids, forcing her to fight. During the battle she pushed Hikaru out of danger and was gravely wounded. Though the threat was over she appeared to have damaged beyond repair, even with help from Tomoya. Despite all odds One Zero came back online to the pleading of Mizuzu, and she was renamed Mana.

Mana would spend her next moments on Earth observing UPG and their battles, occasionally helping them. During their final battle against Alien Chibull Exceller in Vict Lugiel, Mana faked a betrayal to gain access to UPG's former headquarters, and despite resistance from Dark Lugiel, who had completely revived, managed to hack into Victor Lugiel's systems and weaken it, allowing Ginga and Victory to finish it off at the cost of her body being destroyed.

However, in the final scene, it was revealed that Mana had uploaded her data and schematics to the Victorium Necklace given to her by the Victorian Queen, effectively allowing Tomoya to rebuild her from scratch, explaining her presence in the third Ultraman Ginga movie. Split! UPG Resurrection of Lugiel The Adventure Called Life The Fight for Tomorrow

Having been rebuilt by Tomoya, Exceller's badge from her shirt was modified by him into bearing the UPG insignia. She first appeared with other UPG members, welcoming Hikaru after his adventures around the world. Ultraman Ginga S The Movie: Showdown! The 10 Ultra Warriors!

Mana reappeared in episode 7 of the Ultraman New Generation Chronicle, guest-starring with Pega and Booska a bit. Throughout her visit, she showed some confusion towards the other two's personalities, mainly Booska's mannerisms. Despite this, she attempted to understand, becoming friends with them.

Android One Zero with a Chibull Spark

One Zero and a squad of Chiburoids

One Zero talking with Misuzu

One Zero and Misuzu Isurugi in Ultraman Ginga S

One Zero and Mizuzu hold hands 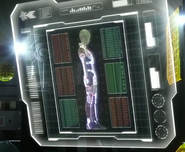 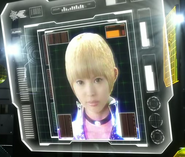