Official website
Official blog
Official LINE blog
Twitter
Mamoru Miyano (宮野真守 Miyano Mamoru) is a Japanese voice actor, actor, singer and narrator. He is affiliated with Himawari Theatre Club and King Records. He is also nicknamed Mamo by certain people and capable of fluently speaking in English. He is famous and well-known for his role as Ultraman Zero's voice actor.

Mamoru Miyano announced that he married in December 2008. Mamoru and his wife have a son together.

Miyano and Zero in behind the scenes. 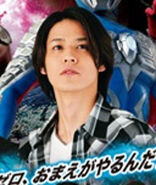