Mamagon is the mother of the monster family, who does all the motherly chores, such as cleaning and cooking for her misfit family of Chibira, Papagon and Getdata. A bit of an airhead, she usually is the one who tries to stop Papagon's inventions from going out of control or solve family problems with other Kaiju such as Agira or Alien Zarab. 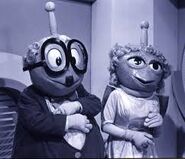