"I am a preacher of love and goodwill: Makoto Aizen...!"

"Look, the Earth is round. I'm sure we will run into each other again eventually. See ya...wait, who was it who said that?"

―Makoto before leaving Ayaka City as himself, This Moment Is A Bond

Ultraman R/B episode 16 "This Moment Is A Bond"

Motoki Fukami
Makoto Aizen (愛染 Aizen Makoto) was the president and general manager of Aizen Tech. He became the first antagonist of Ultraman R/B after being possessed by Cereza.

The actual extent of his traits and behavior is unknown, but judging from his past, he was a man who was dedicated to his job in his father's workplace.

While not much of Makoto's past is known, 15 years prior to the series, he was a common worker for the family’s business of Aizen Iron Works before being possessed by Cereza as a "vessel" in order to blend in to Earth's society. This entire event went for at least 15 years as "Makoto" inherited his father's Aizen Iron Works and became popular across the globe for his industry's research and breakthroughs.

Under Aizen and Mio Minato, the small family business transformed into a very prominent and successful one, and in doing so, Aizen became a celebrity to the citizens of Ayaka City.

As Cereza has no corporeal form, Makoto's body was put to use by providing Cereza an ability to come off as an ordinary human, wield the Gyro and serving as a host for Ultraman Orb Dark.

After Grigio King's defeat, Cereza was expelled from his body by Saki Mitsurugi, leaving Makoto in a collapsed state. After reawakening, Makoto was replaced by Saki as the CEO of Aizen Tech and he himself departed from Ayaka City to go cycling around the world.

"Let me borrow the power of bonds!"

Makoto inserts the Orb Origin Crystal into the AZ Gyro and pulls the side handles thrice. The Orb Ring NEO appears above the Gyro and is switched into the Orb Dark Mode.

Makoto presses the center button, spinning the Orb Ring NEO in a similar manner to Orb Slasher before raising it mid-air. Two giant Orb Ring NEOs appear at his sides before another appears before him a la Fusion Up sequences. Dark rainbow background begins to burst as Ultraman Orb Dark rises, initially making a heart-shaped hand gesture before clenching his right hand forward as he closely approaching the screen. If he already has the Orb Ring NEO on hand, he doesn't need to summon it via the Orb Origin Crystal.

A third one covers Makoto

A third one covers Makoto

When transforming into a Kaiju via a R/B Crystal, Makoto inserts the crystal into the AZ Gryo and pulls the handles thrice. He then raises his right hand into the air and begins to transform. Spirals of energy surround him and turns him into the monster.

Regularly, Makoto write his poems on a piece of paper as a word of advice to his audience. Although this is later revealed to be Cereza's work, Tsuburaya's Twitter site take this joke further by creating posters of Makoto: 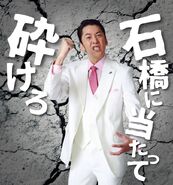 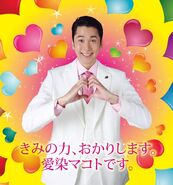 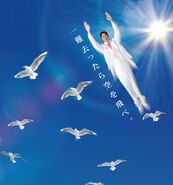 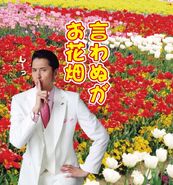 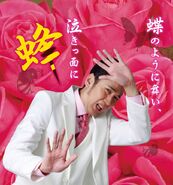 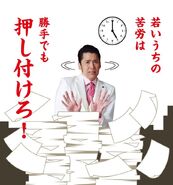 Makoto/Cereza had prepared Ultra Report Cards (ウルトラ通信簿 Urutora Tsūshin-bo) to grade Katsumi and Isami's performance as Ultramen, which he handed to the brothers in episode 8. Limited copies of these (along with a blank report card) were available for purchase at movie theaters during the run of Ultraman R/B The Movie[1]. The contents include: