"The repellent giant beast Maga-Jappa appears, turning even water malevolent with the seas themselves turning foul and the stench even rising from wells."

Maga-Jappa was one of the Lord Monsters created by Maga-Orochi, representing the element of Water. It was sealed away by Ultraman Jack in the ancient past.

In the modern day, Jugglus Juggler summoned Maga-Jappa at Okunara Lake. The giant seahorse-like creature sank into the water, where chemicals on its skin polluted the otherwise-pristine environment. The following day, many businesses that depended on the lake suffered due to the polluted water.

Gai Kurenai eventually found the monster still bathing in the water. At first, Maga-Jappa wasn't even aware of the Ultra's presence, but soon noticed Gai's harmonica. Gai began to tell the monster about proper bathing manners, but this only served to irritate the Lord Monster, who began firing his Maga-Water Flow at him. Gai suddenly encountered Jugglus Juggler, who had been watching the confrontation from nearby. During the confusion, Jugglus managed to steal Gai's Orb Ring, but Gai engaged Jugglus in a hand-to-hand fight and got the device back.

Later, the SSP, along with Ittetsu Shibukawa, showed up and tailed after the monster, who was headed towards Narasawa Dam, which provided Tokyo with much of its water supply. Should Maga-Jappa enter the water, it would become too polluted to use, threatening a water shortage crisis for the city. Ittestsu managed to stall the monster with Shin's Super Absorbent Polymer Gun, or SAP Gun for short, giving Gai the chance to transform into Ultraman Orb to fight the monster.

Maga-Jappa's abilities meant that the fight very quickly became in his favour, as the constant chemical stench he gave off repelled Orb. Not even Orb's Sparion Slash could harm the creature.

Orb, realizing that he needed a stronger form to fight the creature, transformed into his Burnmite form for the very first time, and Maga-Jappa didn't stand a chance against Orb's improved strength. After suffering from the effects of the Stobium Counter and Foot, Maga-Jappa was destroyed once and for all by Orb Burnmite's Stobium Dynamite. In the aftermath of the fight, Gai obtained Ultraman Jack's Ultra Fusion Card from the monster's Maga-Crystal and Jugglus obtained the monster's Kaiju Card.

Majappa is an alien monster that was captured into a talisman-like device by Maiko Namekata's grandmother, and was passed down from generation to generation as a "perfume bottle" that was never meant to be opened. However, the Villain Guild wanted to get their hands on it, sending their agents Alien Keel and Hupnath. In a brawl between Keel and Homare Soya, the talisman was shot, which released Majappa whose first move was to kill Hupnath, who was fighting Hiroyuki Kudo, using its water jet attack. Hiroyuki first transformed into Ultraman Fuma to deal with the monster and initially had the upper hand, until Majappa used its odorous gas and invisibility to turn the tables. Maiko used her powers to see through Majappa's cloaking ability to help Fuma, who knocked it down with shuriken before switching to Ultraman Taiga. Taiga was overwhelmed by Majappa's gas and suction attacks, until he transformed into Photon-Earth and proceeded to maul Majappa. The monster was finished off using the Aurum Strium. The Present for Each

Majappa was one of the many monsters affected by the Devil Splinters and turned berserk. It is seen rampaging alongside a Bemstar and a Segmeger.

Maga-Jappa has a 7" DX figure in the Ultraman Orb wave of figures. 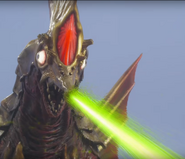 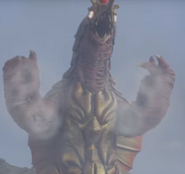 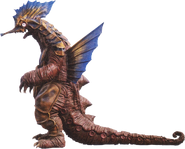