None
Majaba[1][2] (マジャバ, Majaba[1][2]) is a mutant Kaiju that first appeared in Ultraman: Towards the Future episode 8.

Born from chemical misuse, Majaba was first sighted by two men by the names of Johnson and Sandman illegally dumping toxic chemicals in drums as the mantis Kaiju attacked a pesticide plant due to the recent drought in the area. Majaba's irregular flight patterns caught the attention of UMA and were quickly investigated. It did not take long for UMA to find giant locusts and connect them with the sighting Sandman had secretly told them using a drawing of Majaba. As Jack Shindo and Kim went to Johnson's farm to find a connection, UMA spotted a swarm of over sized locusts appear out of nowhere. Between finding out that the locusts are carnivorous and Johnson shooting at Jack and Kim with his shotgun, the situation seemed unsure for UMA's fate.

Johnson left Sandman with his shotgun as he made a run for it in his truck, leaving his partner to face UMA and the locusts. UMA managed to escape the scene just as Majaba showed up to feed on the toxic chemicals inside the barn. However, Majaba quickly followed UMA and if the situation did not seem bad enough Majaba's mate showed up to assist him only for Lloyd to shoot her down. Majaba fled to his nest where UMA soon followed to finish him off. UMA led Majaba away from its nest long enough for Sandman to use an ax to destroy an egg, angering the mantis Kaiju greatly. With the situation turning more hectic, Jack turned into Ultraman Great. At first the battle seemed to be in favor of Majaba, but after Great used the Great Slicer to cut off one of his arms, he used the Star Beam to destroy the nest. When Majaba tried to save his eggs, Charles released a special gooey chemical that killed the mantis kaiju. Great vaporized what was left of Majaba using the Energy Blast to prevent further contamination.

Although not physically appearing, Majaba was one of the hibernating monsters awakened when Genegarg crashed onto Earth. It was found in Australia.

Majaba was absorbed by Celebro using Ultroid Zero, and had his genetic material and energy harvested for use in the creation of Destrudos. His genetic material manifested as his face on Destrudos's chest, his eyes serving as the aperture for the beast's devastating D4 Ray. The Game to Extinction 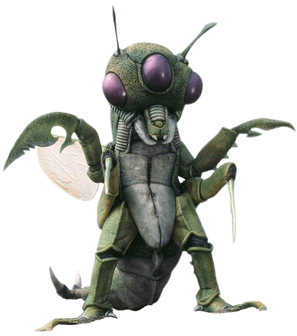 A Majaba figure was released in 1996, under number 77. It features a total of eight points of articulation and has a color scheme closer to the suit.

A DreamWorks figure was released in 1990, standing at 8 inches. It has an accurate paint job and stiff joints. 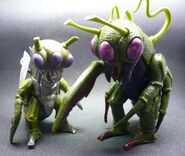 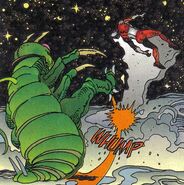 Majaba vs Ultraman Great in the comics 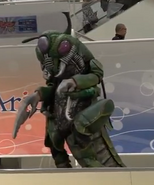 Majaba in a stage show