Mariya Yamada
Mai Midorikawa (ミドリカワ・マイ Midorikawa Mai) is a member of Super GUTS who serves as a communication person. She is the one who nicknamed Dyna. She is 18 years old at the start of the series.

A cute, bubbly, loud cadet-type with little combat experience. She gets peoples' attention by saying 'neh-neh-neh,' and has the amazing ability to hide multiple items behind her back, only to whip them out in rapid succession. She seemed to develop feelings for Asuka in the series but only sees him as a teammate instead.

When Shin Asuka's jet was shot by multiple Spheres and was stranded in space, he was taken to the TPC Hospital where Mai took care of him. After TPC Base on Mars was attacked by Darambia, Super GUTS went to Mars to destroy the Monster. After Kohda and Asuka's jet was blasted down, Asuka got out and mysteriously transformed into a Giant of Light. After they got back to base, Mai decided to name the giant Ultraman Dyna. 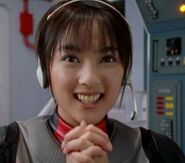 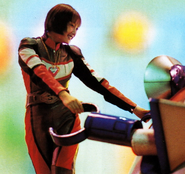