Magular (マグラー Magurā)[1] is a thorny devil-like kaiju that lived on Tatara Island from the original Ultraman TV series. Unlike most Kaiju in the series, it was destroyed by the SSSP instead of an Ultra Warrior. A second one appeared on the Planet Hammer, only to be destroyed by Rei's Gomora. It first appeared in episode 8 of the original series.

A monstrous subterranean behemoth thriving in the Monster Lawless Zone, Magura kept to himself, only poking his head out on occasion to witness the colossal clashes between the island's inhabitants. Magular was first seen emerging from the ground during a fight between Red King and Chandlar. Frightened off by Red King, it burrowed away again and later ran into Hayata and the Captain. The monster attacked and managed to injure Hayata by knocking him down a hill and causing him to lose the Beta Capsule, but was killed by grenades that the SSSP threw at it. The Lawless Monster Zone

After Rei and the Pendragon's captain, Hyuga, escaped Dale's detonated explosions at a ZAP SPACY space station (using a spare fighter plane), a black hole came out of nowhere and sucked them both in, while the Pendragon was incapable of saving them. The black hole was really a wormhole that sent them crashing onto a desert planet much like Bolias. The first monster to appear was Gomess (S), alongside the monster Magular. The two battled, but it was seemingly one sided as Gomess was easily defeating Magular, until it tossed the underground monster aside and aimed for Rei and Hyuga. Rei summoned Gomora to due battle against Gomess, who could do little to save itself from Gomora's onslaughts, until Magular joined the fray. Even with two against one, Gomora easily knocked them around and destroyed Magular with the Super Oscillatory Wave, after stabbing it with its nasal horn. Reionics Hunter (episode)

Magular is one of Ultraman Belial's 100 Monster Army. He teamed up with King Silvergon, King Goldras, King Guesra, Gomess (S), Alien Baltan, Zetton, Arigera, Twin Tail, Antlar, and Gudon to take on Ultraman. He was Ultraman's first explosive kill as he flipped it over and causing it crash to the ground and explode. Mega Monster Battle: Ultra Galaxy Legends The Movie

Magular is one of the Spark Dolls that were awakened by the Ultra Flare. In episode 1, it was seen attacking Paris, France, specifically near the Arc de Triomphe. A Voice From the Starry Sky

Magular reappeared in the puzzle role-playing game for mobile devices, Ultraman Galaxy as a UC (Uncommon) card that you can unlock it in one of the levels in the game with a rare chance of getting Magular. 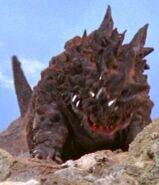 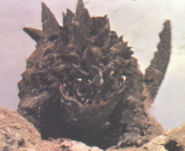 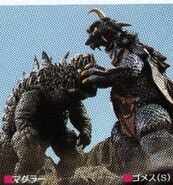 Magular about to fight Ultraman 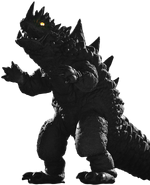 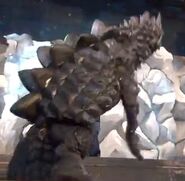 Magular as he appeared in the Stage Show

Magular and Red King vs Ultraman 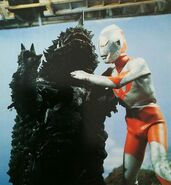 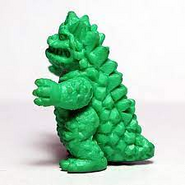