None
Magnia (マグニア Magunia) is a monster that appeared in the TV series, Ultraman Tiga. It appeared in episode 22. When it feed on humans, it used the small parasitic form of Magnia Parasites (マグニア寄生体 Magunia kisei-tai).

Magnia was an alien monster that came to Earth in a meteor to feed. As its meteor was dormant, Magnia transformed itself into its parasite forms and traveled around in a foggy mist to find hosts to feed the meteor energy. Magnia was able to round up several humans and took them to the meteor's destination to feed it, but once GUTS arrived, Magnia took the offensive and used the controlled humans to attack Daigo and Horii of GUTS. After Daigo was knocked unconscious after trying to leave the mountain Magnia was residing, Horii was left to protect the daughter of Professor Ezaki from the Magnia swarms. Once the Magnia's weakness to water was exposed, Horii and the daughter were able to fend off the swarms long enough for GUTS to arrive.

Realizing its meteor was endangered, the parasites and fog merged to form Magnia's true form, who began attacking GUTS to protect its meteor. Daigo was able to awaken from being knocked unconscious and transformed into Ultraman Tiga to combat the monster. However, Magnia had already drawn many humans's energy into its meteor, and used their power to strengthen itself into overpowering Tiga, who was already in Power Type. With the assistance of GUTS, Magnia's meteor was destroyed and Magnia itself was powerless to stop Tiga, who quickly regained control of the fight. After Magnia was beaten into becoming weary, Tiga destroyed it with the Deracium Beam Torrent. 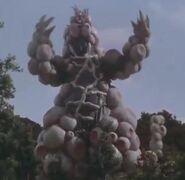 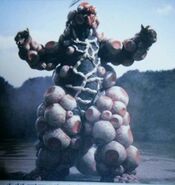