"Magnetic Monster Magnegauss. It has magnet horns on its shoulders which emits a powerful magnetic beam, and protects itself with a barrier."
"Good. The monster's got a great evil looking. Magnegauss, distract the security computer and bring up a chaos."

A thief called Kaitou Marty was on the loose and he broke into houses by cracking security systems. He robbed the Babas and proceeded to Takeshi Todo's house, but fled after an encounter with Kahn Digifer. Conveniently, a security expert showed up and offered his new revolutionary home security system called Cat Eye Security. Takeshi learned of the break-in and soon discovered that Kaitou Mati and the expert were the same person. To punish the swindler, Takeshi created Magnegauss to infect the Cat Eye System. Anyone with this system installed would become trapped in their homes. Gridman could not defeat the monster alone as Magnegauss used its magnetic powers to deflect many of his attacks and drain his power. Ippei Baba modified the vehicles to combine into God Zenon giving Gridman the chance to use the Grid Beam to destroy Magnesgauss.

Blinding Light
Add a photo to this gallery 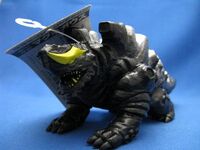 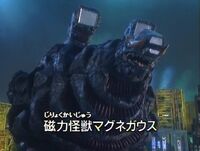 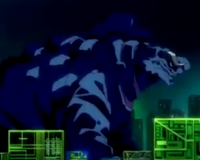 Magnegauss in anime short.
Add a photo to this gallery
Retrieved from "https://ultra.fandom.com/wiki/Magnegauss?oldid=534896"
Community content is available under CC-BY-SA unless otherwise noted.