Magnedon (マグネドン Magunedon) is a stegosaurus-like Kaiju that appeared in the fourth Ultraman Series, Return of Ultraman. He first appeared in episode 20.

With its magnetizing powers, Magnedon caused a mass amount of airplane accidents near its resting place. His existence, MAT rushed to the scene where Magnedon was sleeping near a village. Noticing Magnedon's magnetic powers and while it seemed entirely docile, its powerful magnetic waves made it far too dangerous to be kept alive. A special bomber unaffected by magnetism was called in and bombs were dropped, blowing Magnedon to pieces. However, in the middle of the night, the severed pieces of the Kaiju came back to life, slowly crawling towards one another again. The creature pieced itself back together again, but still did not attack.

Noticing the Kaiju was still alive, MAT formulated an idea to use power from a nearby power plant to electrocute the monster as he slept. Once the electrodes were attached to the monster, billions of volts were run through the monster, sending him into spasms and sparks given off. However, the electrodes wires gave out before the monster could die, sending Magnedon into a rampage. Spitting flames, Magnedon slammed his tail into a nearby dam then proceeded to tear it down.

Go transformed into Ultraman Jack, threw Magnedon to the side and used the Ultra Bracelet to repair the dam. However, Magnedon quickly ran up behind the hero and used his horns to launch him onto his back. Then magnetized the hero, sticking him to his back. Forced to call the Ultra Bracelet back to him to free himself, the dam continued bursting. Jack used the Ultra Bracelet to demagnetize Magnedon long enough to fly him into space and continue the battle on the surface of an asteroid. The creature’s natural strength made it difficult for Jack to fight the monster, but seeing as they were not in Earth’s atmosphere, Jack could fight on indefinitely and Jack completely obliterated Magnedon with the Ultra Spark. But Jack realized that Magnedon was not a truly evil beast, and so he put up a constellation of the monster in its memory. 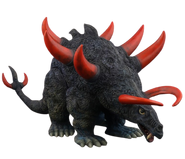 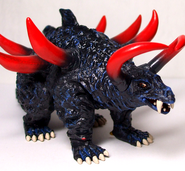 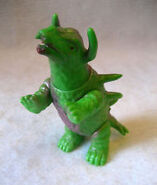 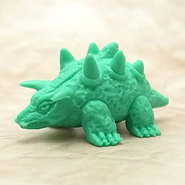