"Then, a hero appeared and sealed Orochi away and rescued her. In order to prevent the creature from ever reviving, she used the hero's power to create a barrier and has been guarding the forbidden forest ever since."

―An article's depiction of Princess Tamayura and Maga-Orochi.

"When an arrow like a bolt from the heavens strikes with wicked force, Orochi is reborn."

―Magatano-Orochi's description in the Pacific Records

Maga-Orochi:
Magatano-Orochi:
Maga-Orochi (マガオロチ, Maga-Orochi) is a Kaiju that debuted in Ultraman Orb. A giant space Kaiju that devoured every star in its path, it was put to sleep by Zoffy in the ancient times before being awakened by Jugglus Juggler through the use of the 6 Kaiju Cards of the other Lord Monsters and Ultraman Belial's Ultra Fusion Card in the present day.

Although it was seemingly killed after its defeat by Ultraman Orb's Thunder Breastar form, Maga-Orochi shed its juvenile form. Its spirit had actually descended into the Earth's crust, maturing into its adult state, Magatano-Orochi (マガタノオロチ, Magatano-Orochi). This form is the final and most powerful monster to appear in the series.

Magatano-Orochi's name is derived from Yamata no Orochi, a giant eight-headed snake of Japanese legend.

The current design of Magatano-Orochi was made by Fuyuki Shimada, who excluded its arms in order to give its giant mouth better mobility by having the suit actor move it.

Maga-Orochi is a parastic monster hailing from the Monster Galaxy (モンスター銀河 Monsutā Ginga), who fed off the energy of planets, destroying them in the process. It traveled from planet to planet, draining them of their energy until it came to Earth, where it rested deep underground as the Maga-Soul (マガ魂 Maga Tamashī), an egg-like state. Its power resonated with the elements of the Earth, and spawned the other Lord Monsters, which prompted the Ultra Warriors to go to Earth after sensing instability in the environment, and sealed them away. At some point, Maga-Orochi also kidnapped a princess by the name of Tamayura, until it was defeated by a warrior of light, causing it to be trapped in its egg state. However, the seal on it and the other Lord Monsters would not last forever. Since then, the princess used the warrior's power to keep the seal of Maga-Orochi from being broken, and was heralded as the protector of the forbidden forest.

In present times, Jugglus Juggler used his Dark Ring, along with his Lord Monster Kaiju Cards, to summon a giant glowing meteor from the ground. The meteor's dark energy was restrained by the protective seal of Zoffy's Ultra Fusion Card, until the mastermind used Ultraman Belial's Ultra Fusion Card to completely negate the former's power. The meteor burst and revealed the Great Lord Monster Maga-Orochi, which immediately began to rampage towards the city. Gai transformed into Ultraman Orb and used all of its available forms to date, ranging from Spacium Zeperion to Hurricane Slash, and finally Burnmite but the Lord Monster rejuvenated itself in seconds and inflicting great damage to him. Devoid of energy and unable to carry on, Orb’s form evaporated into particles and Gai was reverted back into his human form, falling unconscious from the over-exertion. With Orb out of his way, Maga-Orochi continued to lay waste to the city while Jugglus Juggler stole Gai's Ultra Fusion Card Holder. Trouble! Mama's Here!

Having destroyed the majority of the city, Maga-Orochi decided to lie down and rest. But the monster's vitals and brain activity were rapidly increasing while it was sleeping, according to Shin's Biological Activity Analyzer. After regaining its energy, the monster woke up and continued its warpath of destruction. When it noticed Gai trying to transform for the second time, it tried to kill him, but Princess Tamayura used her powers to keep the monster at bay in an effort to buy Gai some time to transform. However, Maga-Orochi overwhelmed Tamayura's magical powers and presumably obliterated her with his Maga Thunderclap. Shocked at the princess's disappearance, Gai decides to use his anger to finally summon Ultraman Belial and complete his transformation to Ultraman Orb Thunder Breastar. Unlike his previous forms, Orb's Thunder Breastar form possessed the power to fight the Great Lord Monster head-on, fighting in full retaliation to the point of severing its tail. Harnessing the light and dark energies of Zoffy and Belial, Orb unleashed his Zettcium Beam for the grand finale, a beam powerful enough to knock back the monster and eventually destroy it in a fiery explosion. Bearing witness to this unexpected outcome, Jugglus Juggler became extremely furious that this powerful Kaiju he resurrected was not able to defeat Orb for good. The Dark King's Blessing

"Looks familiar doesn't it? It's Maga-Orochi's tail, which you tore off."

Maga-Orochi's severed tail was kept by Juggler as part of the components to create Zeppandon, the other two being Zetton and Pandon's Kaiju Cards. During the second fight between the then notorious fusion Ultra and the fusion Kaiju, Juggler's choice to have made Orochi's tail a component of the latter proved to be a grave mistake, one that led to Zeppandon's, and his, downfall. After Orb saved the SSP, Naomi kept to her promise and "saved" Orb, allowing him to retrieve the Orb Calibur from Orochi's tail and unsealing Orb's Origin form, which he then used to defeat Zeppandon. An Unforgettable PlaceThe Holy Sword, Restored

"The darkness of the humans will give birth to Magatano-Orochi. And they'll send their own planet to hell."

Soon, it was revealed that when Maga-Orochi was seemingly resting before it lost to Orb, it was giving its life to Earth. Its presence was sensed by many aliens that hidden on Earth to go back to space. The Unmarked Cafe This presence was also sensed by Juggler's Jashin Blade but after failing to defeat Orb in their gigantic proportions, he allowed himself to be captured by VTL and inform humanity of their own impending doom. The Blade of Darkness Orochi's reawakening took effect once more, resulted in rising temperatures, aliens leaving Earth in UFOs, aquatic Kaiju coming ashore, subterranean Kaiju dying suddenly, unusual storms and buildings sinking around the Tokyo Tower. He also informs them that Orochi is nearing the Tokyo Tower and inform them to destroy it in its chrysalis state, but when they did so with Spiner-R1 missile, the explosion instead unleashed Magatano-Orochi onto the world, just as how Juggler expected. It rampaged throughout the city and began to cause mass destruction, along with using numerous attacks from past Lord Monsters as it began to consume the Earth. After interrogating Juggler, Gai took immediate action and transformed into Ultraman Orb Thunder Breastar once more, seeing as how that form defeated Maga-Orochi before. When said form prove ineffective, he utilized Orb Origin and fire Orb Supreme Calibur but the monster literally ate his energy beam and ended the fight with Orochi penetrating Orb's Color Timer, rendering him untransformed. With Orb defeated, Orochi continues its rampage while facing against Z-VTOL fighters. The Giga Lord Monster Strikes Back

"One who reaches for the sun, with a purifying spirit, blocks Orochi's wicked spirit, becoming a demon gate."

―Magatano-Orochi's description of its weakness in the Pacific Records

After confronting Juggler, Gai transformed into Orb, using Spacium Zeperion and Burnmite before assuming Orb Origin. When the Ultraman's Color Timer began to blink, Magatano-Orochi was about to finish him off for good, but then, Jugglus Juggler, who was convinced by Naomi Yumeno to do the right thing, turned giant sized and slashed at the monster. At that moment, Orb and Jugglus finally reunited in battle and took on the Kaiju together by dodging and blocking its attacks and attacking it with their swords. However, the Ultimate Lord Monster was still standing and knocked the two warriors down with an enhanced tackle.

Meanwhile Shin and Jetta found out that when Maga-Orochi was giving its life to Magatano-Orochi, the transfer was interrupted by a sacred tree, resulted in the lower right part of Magatano-Orochi being incomplete and easily exposed, specifically on a point behind the kaiju's jaw, and the Z-VTOLs were able to expose the weak spot. Hearing it, the two warriors came at it and hit that area with their respective enhanced punches, but the Demon Beast ensnared Juggler with his tentacles and used him as a shield from Orb, yet Jugglus encouraged Orb to shoot his most light ray at the monster anyway. With that taken care of, Ultraman Orb finally eradicated Magatano-Orochi (and Jugglus Juggler supposedly) with the assisted power of his Ultra Fusion Cards, resulting in the same explosion that occurred 108 years ago in Rusalka. As he flew away, Juggler appeared to have survived the explosion, watching his human form Gai departing. The Wandering Sun

As part of Absolute Tartarus's plans to take over the Land of Light, he travelled throughout the timeline, acquiring and recruiting a range of monsters and aliens for use in his schemes. Among these acquisitions was Maga Orochi's egg, a Maga-Soul. The Maga-Soul was placed on Planet Mikarito, where it began to eat away at the planet's lifeforce, causing it to rapidly age. Ultraman Max and Ultraman Ribut, a Civilization Observer at the time, went to the planet's caverns to investigate its ageing and came across the egg. While attempting to destroy it, Hellberus and Alien Sran appeared, the latter infecting Max with Gudis' cells to transform him into a monster that would be fed to Maga-Orochi to accelerate its evolution into Magatano-Orochi. Max ordered Ribut to escape and report the situation to the Inter Galactic Defense Force just before passing out, having been caught by the egg's tendrils and having his light energy drained.

Following Max's rescue and cure from his infection, Maga-Orochi hatched, now empowered by the Gudis cells in the surrounding area. Though the Maga-Soul hadn't absorbed enough energy from Max to accelerate its development into Magatano-Orochi, Maga-Orochi remained strong due to the Gudis Cells circulating through its body. Despite his weakened state, Max knew he would have to fight the Lord Monster, but fortunately Ultraman Xenon made his presence known, sending Max the Max Galaxy and recharging his energy, before then arriving in person. Together, Ribut, Max and Xenon teamed up to battle the beast, who was eventually taken down, his corpse remaining on Mikarito's surface after death. The Beginning

When Juggler, as Hebikura, replicated Haruki Natsukawa's Z Riser via the Jashin Blade, the Dark Z Riser came with Kaiju Medals of Zetton, Pandon, and Maga-Orochi, which were used to form Zeppandon once again. First Juggling

Energy Consumption
Add a photo to this gallery
Maga-Orochi

Life Force Transferring
Add a photo to this gallery
Magatano-Orochi

Durability/Energy Absorb
Add a photo to this gallery 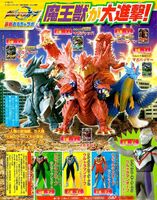 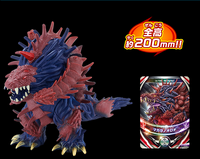 Add a photo to this gallery
Retrieved from "https://ultra.fandom.com/wiki/Maga-Orochi?oldid=541671"
Community content is available under CC-BY-SA unless otherwise noted.