Ultraman Tiga episode 9 "The Girl Who Waits for a Monster"

None
Machina (マキーナ Makīna) is a Kaiju that first appeared in episode 9 of Ultraman Tiga.

Machina's name likely comes from the Latin term "deus ex machina," meaning "god from the machine," which is used to describe when a hopeless situation is solved by an unlikely occurrence.

Machina's design is based on an armadillo.

Machina was an alien monster who called to Earth by Saki, an alien girl who had lived on Earth as far back as the year, 1802 A.D. (and whom Daigo had met as a child before becoming Tiga.) When a capsule was dug up in a construction site, Saki played a special flute that caused the capsule to emit a beam of light beyond Earth's atmosphere. Receiving the signal, Machina landed in Tokyo Harbor and began his trek to reunite with Saki. Machina was met by opposition from GUTS, but his armor was more than enough to protect the monster from their assaults. However the sun was setting as so Machina decided to recuperate until tomorrow.

Machina awoken the next morning and again was met with GUTS's assaults via land mines that fired at his unprotected areas beneath his armor. During the assault, Saki was able to reunite with Machina. However just as a land mine was about to endanger Saki, Daigo transformed into Ultraman Tiga and quickly rescued her from danger. Taking Tiga's actions as a threat towards Saki, Machina attacked Tiga and both alien and Ultra battled. Tiga was able to overpower Machina once he transformed into Power Type, but just as he was about to finish off the alien with the Deracium Beam Torrent, Saki stepped in and explained that Machina only came to Earth retrieve her and that she had been waiting on Earth for hundreds of years waiting for her arrival. Now understanding of the situation, Tiga allowed Machina to Saki and together both aliens left Earth peacefully. 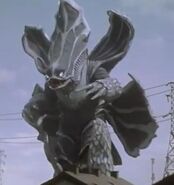