Belonging to the Earth defense organization of the United Nations, the Monster Attack Team was formed in order to kill the monsters that were awakened by extreme weather events and phenomena of the earth.

They have a headquarters in New York as well as Japan, where they have a ground base in Kanda Nishiki-cho, Tokyo, and a submarine base in the deep seabed of Tokyo Bay. In addition, they also owned a space station.

The ground base and submarine base are connected by giant pipework, to move in the air support. Related weapons are housed in the sea base. In the last episode of Return of Ultraman, Alien Bat destroyed a large part of the base. It is unknown what happened to the support members, but the base begins to be rebuilt.

Subsequently, TAC is considered to have a file on MAT, and they have already disbanded. Similarly, Crew GUYS also has records from MAT.

After the Ultra Guard disbanded, a new strike force was devised to protect the Earth and its people from alien machinations and monster attacks during what came to be known as the "Great Age of Monsters" (AKA Third Age of Monsters). To solve this problem MAT was created, combining elements of the Ultra Guard and the SSSP.

In mid-1971, MAT was already well as established and well-funded, maintaining an underwater base off the coast of Japan, as well as their main base in Tokyo.

MAT faced their first great monster threat in the form of the creatures Takkong and Zazahn. Despite the combined efforts of the defense team and the military, the two monsters leveled a considerable area in the city.

Takkong soon returned not long after and attacked MAT's underwater base, but was eventually driven away, only to commence an attack at an oil refinery. Thankfully, his attack was stopped by MAT's latest member, ex-race car driver Hideki Go, under the guise of the latest Ultra to arrive on Earth, the original Ultraman's almost identical younger brother in arms; Ultraman Jack.

Over the following year, MAT and Jack were constantly tried by various evil aliens and kaiju, ranging from the matter-eating alien monster Bemstar, the sadistic Alien Nackle and his bodyguard monster Black King, to the vengeful Alien Baltan Jr., and many more. Despite these lethal enemies, MAT and Jack always wound out on top one way on the other.

In March of 1972, Jack and MAT were to face their greatest challenge. The power-hungry Alien Bat had come to invade Earth with the revived Zetton, the very monster that had defeated the first Ultraman when he came to Earth. When Jack refused to let Hideki to transform, it was up to MAT to save the planet. Unfortunately, Zetton proved far to powerful to destroy. Fortunately, Jack, touched by MAT's courage under hopeless odds, let Hideki transform one last time. Working closely together, Jack and MAT defeated Zetton and his master, ending the Third Age of Monsters. MAT disbanded not soon after. However, MAT's tenacity would still resonate among their succeeding organizations, and their efforts directly led to the foundation of the group's successor, TAC.

Captain Katsuhiro Kato (加藤 勝一郎 Katō Katsuichirō): 38 years old. Formerly a colonel of the Ground Self-Defense Force and the first captain of the MAT Japan branch. He is no-nonsense at times, while other times he tends to joke around with his crew. All the same, he is very protective of his small MAT team, and sometimes disregards orders if he feels the circumstances warrant it.

Kato has mentioned he has an older brother and a nephew. His brother is the president of a railway company, and his nephew appeared in series. He leaves in episode 22 having been promoted to the MAT Space Division Captain after the attack of Bemstar, and is replaced by Captain Ryu Ibuki. He is designated as MAT member No.1.

Transferred from MAT headquarters in New York. He is a little more passionate than Kato, sometimes using a harsh voice when performing his duties and giving orders, he has a gentler side of himself that he doesn't hide from his team. He is married and has a daughter, and as a result are the ocasional targets of Aliens invaders trying to control MAT. It is shown in series that he may be aware of Go's secret identity of Ultraman Jack.

He was Kato's senior officer when they where in New York, and is also designated as MAT member No.1.

Takeshi Minami (南 猛 Minami Takeshi): 25 years old. He hints that he grew up on a farm, and tends to watch over the other officers, especially the new member Go. He is designated as MAT member No.2.
Fumio Kishida (岸田 文夫 Kishida Fumio): 25 years old. He comes from an old military family, and tends to have connections still with the higher-level officers who oversee MAT. He lives with his mother, but his father is deceased, as is his older brother who committed suicide upon learning a family secret. During the Gudon and Twin Tail attack he was extremely harsh to Go and convinced to nearly resign. He is designated as MAT member No.3.

He dated Alien Centaurus, being the first attack team member to have relations to an alien.

Ippei Ueno (上野 一平 Ueno Ippei): 23 years old. Sometimes superstitious, and loose in his methods when compared to Officer Kishida. He is very supportive of Go. During the later half of Return of Ultraman, he becomes more comedic. He is designated as MAT member No.4.
Yuriko Oka (丘 ユリ子 Oka Yuriko): 20 years old. The only female in the team, but she is very capable, having saved the team by flying the planes or even from being brainwashed. She also serves as communications officer. She is designated as MAT member No.5

Hideki Go (郷 秀樹 Gō Hideki): 23 years old. The newest member to MAT and was killed while trying to save a young boy and a dog. Ultraman, upon witnessing this act, merges with Go's body to revive him and allows Go to transform when needed. He lives with the Sakata family on his off time from MAT, and before the series, race cars. Due to Ultraman's power, his senses are more enhanced to the point that he can hear and see monsters that other humans can't, and attains telepathy. Transforms through sheer force of will, not requiring a transformation item like other Ultraman Series heroes. However, the will isn't that of Go's but actually Ultraman's; he can either block the process or even transform against Go's will as a defensive reflex. He is designated as MAT member No.6.

He was fired in episode 2 after alerting Takkong. Then he was put on a 3 day home arrest after failing to attack Gudon. He resigned when Chief Kishida ordered the Laser Gun to be used against Gudon and Twin Tail but after Ultraman Jack taking the two out Go joins back.

MAT Arrow1[2] (マットアロー1号 Matto Arō 1-gō) is MAT's primary VTOL. It is a multi-seat but can also be operated single seat. The VTOL's armament consists of the Vulcan Cannon and missiles, both mounted on the main wing. In episode 13, a rocket bullet pod was equipped as well. The nose of the Arrow can shot a laser.

MAT Arrow2 (マットアロー2号 Matto Arō 2-gō) is a fighter jet that has semicircular wings. The plane's armament is the same as MAT Arrow 1, except a laser cannon replaces the rocket bullet pod. The Arrow 2 can fly much higher than MAT Arrow 1 as it can fly all the way to the stratosphere. Episode 27 was the plane's last appearance with new footage, afterwards the plane was only shown as stock footage.

A children's book describes this plane to be closely related to the F-16.

MAT Gyro (マットジャイロ Matto Jairo) is a battle Tilt Rotor with large propellers on the left and right and small propeller at the rear. It is made out of special steel so it withstand any chemicals or heat. MAT Gyro is also used to transport goods. Gyro can also be split into two as shown in episode 34. The two planes are called Gyro A (ジャイロA Jairo A) and Gyro B (ジャイロB Jairo B). Its armament includes a Vulcan Cannon and a rocket bullet pod. It can also equip different ammunition such a Napalm Bullet, Spray Paint, extinguisher, spray, and frozen droppings, and a laser.

The Space Arrow (スペースアロー Supēsu Arō) is a modified MAT Arrow 1 for space travel. The spaceship is completely unarmed.

The MAT Vehicle[2] (マットビークル Matto Bīkuru) is a special-purpose vehicle that is mainly used for Patrol. Sometimes Rocket Launchers are attacked to the celling of the car for emergencies. It is modeled of the Mazda - Cosmo Sport. 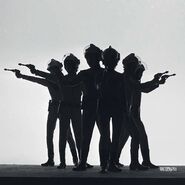 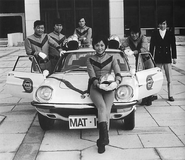 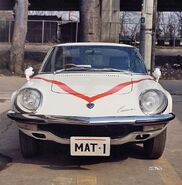