Ultraman Z episode 20 "To Care and What Lies Beyond"

M1 (M1号 Emu Ichi-Gō)[1] is an artificial lifeform that debuted in the TV series, Ultra Q.

A super express train called the Inazuma-1 was on its maiden voyage carrying many passengers, one of which was carrying a suitcase containing the first man-made artificial lifeform, codenamed M1. When Ippei accidentally brought the suitcase containing M1 onto the Inazuma-1, it was confiscated and put into the trains on-board safe. However, during the voyage, stimulated by a camera flash, M1 grew into an ape-like creature, broke out of the safe, and scared one of the crew members.

In a panic, M1 took control of the Inazuma 1, accidentally altering its speed to dangerous levels. To save the train, the staff manage to disconnect the passenger cars, but a young boy, Itachi, who stowed away on board was left in the cockpit with M1. Unable to stop, the Inazuma 1 collided with a bulldozer and two buildings, destroying it in the proceess. Itachi, hiding inside the Inazuma's heat and shock-resistant safe, and M1 managed to survive the Inazuma's destruction via the train's momentum shooting them into space in the crash. Both the safe and M1 were last seen spinning in Earth's orbit. Observing the beauty of the planet below him, M1 spoke directly to humanity for the first time with the words "I am a Seagull". The Underground Super Express Goes West

M1 was originally an artificial being created by humanity years ago. However, it was deemed a failure and jettisoned into space, orbiting the Earth. Due to this, M1 grew disgusted of humanity and believed that coexistence between humanity and other lifeforms was impossible.

In the present, when Ultraman X was fighting EX Gomora, M1 intervened, shrinking X down and trapping him in a sealed conical flask, as M1 wanted to see humanity's reaction towards Gomora without X interfering. Seeing Asuna's determination in wanting Gomora to come to its senses without offensive means, M1 released X back to Earth. He decided to observe humanity again, finally having faith in coexistence. Living Together

M1 is a lifeform created by Ruri Inaba, who's body cell is potentially beneficial in the medical field. A rival organization tries to kidnap M1, but the creature grew into a towering monster after being slammed onto a generator box. In order to neutralize M1's rampage, King Joe fired the tranquilizer dart, putting M1 to sleep. STORAGE decided to help Ruri by creating a formula capable of shrinking M1 back to normal size, despite Director Kuriyama's insistence on killing it. Hebikura agreed to this, however noted that killing M1 is an obligatory if it reaches 1,000 meters away from the populated area.

8 AM in the next morning, STORAGE members attempted various operations to distract M1 before it reaches the city, including the use of banana aroma, rugby double tackle, tug-of-war capture operation and finally the maintenance crewmembers performing kumi daiko performance. The shrink serum was finished, with Bako volunteering himself for the job. Haruki transforms into Ultraman Z Beta Smash and did few wrestling moves to keep M1 away. Transforming into Delta Rise Claw, the Beliarok unleashes Deathcium Claw to restrain M1 as Bako uses King Joe as a platform to launch the shrink serum through his bazooka. M1 shrinks down into orignal size and made it out safely and reunited with Ruri, the latter thanking her father. To Care and What Lies Beyond

M1 returns in episode 7 of the variety show, Ultra Zone. It is confirmed, unlike Kemur and Ragon, that he is the same M1 from the original Ultra Q. He was floating in space until a voice awoke him, and he flew to Earth. 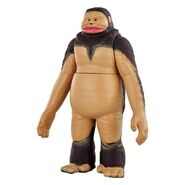 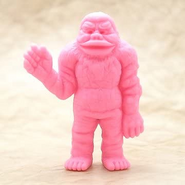 M1, Galberos, and Birdon in an Ultra Zone sketch 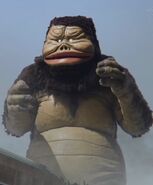 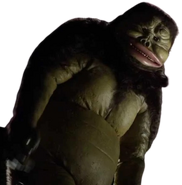 M1's concept art along with early sketches for M2

Model of concept art M2 and M1 himself

M1 as he appears in Gaki no Tsukai

M1 making another cameo in Gaki no Tsukai

M1 from the third episode of Kaiju Walk.