Ultra Fight Victory
Lunaticks (ルナチクス Runachikusu) is a rabbit-like Terrible-Monster that first appeared in the TV series, Ultraman Ace. He appeared in episode 28.

One of the first Terrible-Monster created by Yapool, Lunaticks was responsible for draining the moon of its magma and leaving it a barren wasteland. Upon arriving on Earth, Lunaticks began to feed on its magma as well, but he would only feed on nights of a full moon in the month of October. Eventually, Lunaticks was discovered one night while he was creating abnormal volcanic activity near a public hot spring and TAC began to assault the monster. Lunaticks managed to down one of their jets by launching his eyes at them, but rather than continue fighting, he burrowed underground to resume feeding on the magma from within the Earth.

When Minami informed Hokuto that her past was deeply connected to Lunaticks, they took matters into their hands and transformed into Ultraman Ace. Drilling into the Earth to confront the Terrible-Monster, Ace was initially overpowered by Lunaticks's recharged strength and the unbearable heat surrounding them, but managed to fight through to stop the Terrible-Monster from feeding. Desperately, Lunaticks caused a cave-in with his eye bombs and retreated to the surface with Ace right behind it. The two resumed their battle on the surface but Lunaticks appeared to have gotten more powerful after his meal of lava and began overpowering Ace, whose Color Timer started blinking under the assault. After a long and fierce battle, Ultraman Ace emerged victorious after he hurled Lunaticks into a volcanic eruption (that was created when Lunaticks returned to the surface,) which set Lunaticks on fire and burnt the Terrible-Monster alive. Farewell Yuko, Sister of the Moon

Lunaticks reappeared in episode 44 of the series, Ultraman Mebius.

During Mebius' battle with Mebius Killer, GUYS was sent to dispose of a large crystal object that had landed on the moon. However, the crystal had created a field that caused their airship to malfunction, crashing into the moon's surface. Guided by the advice of Hokuto (the host of Ultraman Ace) through Marina's thoughts, GUYS managed to get their smaller aircrafts in order to destroy the crystal. As they were ready to attack, the crystal released the Terrible-Monster, Lunaticks to attack them. Lunaticks fought back by attacking GUYS with his Gas and Fireballs, but thanks to the assistance of Hokuto, the crystal's field was destroyed, allowing GUYS to escape, despite Lunaticks's interference. Lunaticks continued to attack GUYS. Hokuto saw that Mebius had defeated Mebius Killer, and decided to assist GUYS by transforming into Ace. Ace and Lunaticks fought each other as GUYS was left to destroy the crystal and sure enough, Lunaticks was destroyed by Ace's Metalium Beam. Ace's Wish

In this series, Lunaticks is partnered with the monsters Nova and Saramandora and all three monsters were guarding a military base that had supplies which the ZAP SPACY needed for their ship. Rei sent Gomora as the ZAP SPACY retrieved the parts they needed. Gomora easily destroyed Nova, vaporizing him instantly with the Super Oscilatory Wave, but Salamandora and Lunaticks double-teamed Gomora and beat him down. Before the battle could progress much further, both Salamandora and Lunaticks were destroyed by the appearance of four black ships that would immediately reveal themselves to be King Joe Black. Unexpected Reunion

Lunaticks reappeared in the movie Mega Monster Battle: Ultra Galaxy Legends The Movie as one of Ultraman Belial's 100 Monster Army. He teamed up with Mukadender, Kelbim, Angross, Gromite, Froguros, Birdon, Jasyuline, and Alien Valky. During the final battle, as Belial shoots thunder from his Giga Battlenizer to knock down Ultraman Mebius, Lunaticks is killed along with Jasyuline.

In episode 7, Lunaticks along with many other monsters are seen cheering for Ultraman Ginga as he fights Dark Galberos.

While Victory was kept busy with the new and improved Ace Killer, Yapool summoned Lunaticks to kill Ginga. Victory then decided to use the Knight Timbre to bring Shepherdon back to life, the process temporally knocking away Victory Killer. Victory Killer then got back up, summoned his Gudon Whip and fought Victory again until the knight slashed him across the chest with his glowing sword twice and finally finished him off with the Knight Victorium Shoot, while Shepherdon finished off Lunaticks with his Victorium Flash.

Lunaticks appeared as a Cyber Card in the final episode of Ultraman X. After Daichi and Ultraman X spoke out to Gomora and struck Greeza right in the center of his chest, Lunaticks, along with all of the other Cyber Cards, traveled to X and united with him. Cyber Lunaticks's power was used to help form the Hybrid Armor and power up the Ultimate Xanadium to defeat Greeza once and for all. Lunaticks, along with the numerous other Cyber Cards and Spark Dolls, then appeared and thanked Daichi as he thanked them. The Rainbow Land

Using the data of Lunaticks's Spark Doll, a cybernetic/artificial version of it was created and contained in a Cyber Card, namely Cyber Lunaticks (サイバールナチクス Saibā Runachikusu).

During episodes 12 and 13, Lunaticks emerges from underground and is seen attacking a city in which a couple and several generated Hoes are residing in. The provoked Hoes merge into a giant Hoe and battle the Lunaticks, sending the Terrible-Monster into retreat.

Lunaticks reappeared in the puzzle role-playing game for mobile devices, Ultraman Galaxy as a C (Common) card that you can unlock him in one of the levels in the game with a very high chance of getting Lunaticks. 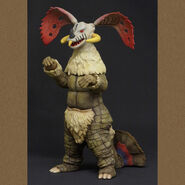 Figure of Lunaticks, by U.S. Toys 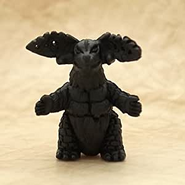 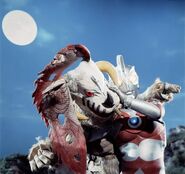 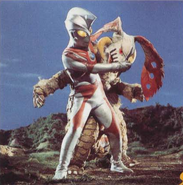 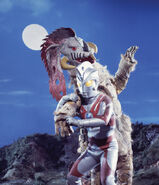 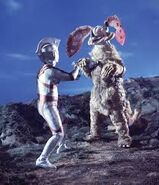 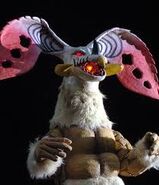 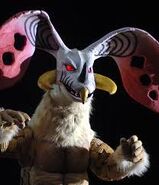 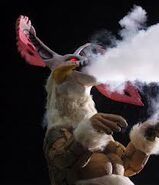 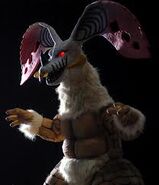 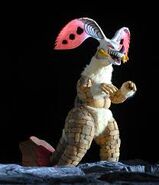 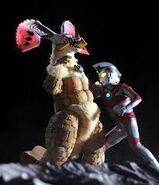 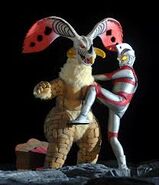 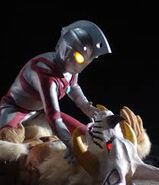 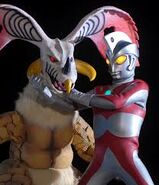 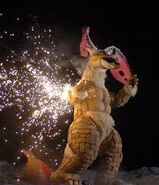 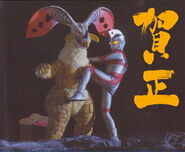 Lunaticks, Saramandora and Nova VS Gomora

At the front row 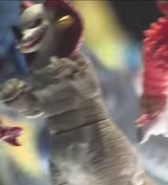 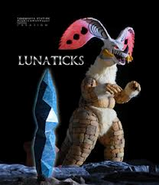 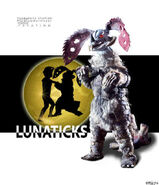 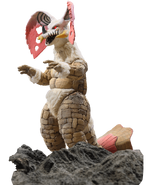