"They're like Samekujiras... another lifeform that gets dumped in space. This could be the same one we failed to catch in Ethiopia 7 years ago."

Lunah are races of space lifeforms which initially kept as animals by certain aliens until they were dumped. One single member reaches Earth seven years prior and managed to evade capture from AIB while developing symptoms of Little Star.

In the present day, this Lunah encountered a struggling comedian named Takashi Arai who recently broke his fingers. After being fed with a piece of bread, Lunah repaid his kindness by healing his fingers and Takashi decided to adopt it by the name Moko (モコ, Moko). Using Moko's powers, Takashi earns his living by healing people but finds that he is neither moving out of poverty since several few managed to evade payment. Moa and Zenna try to target Moko, followed by Riku, Laiha and Leito due to its Little Star. Takashi even made it clear that he willingly sell Moko to them, earning the anger of Zero until Arstron's appearance. Despite his initial selfishness, Takashi went to save Moko from being entangled by several nets, seeing how it stayed with him unlike his previous comedian partners.

During Ultraman Geed's battle with Arstron, Moko's wish allows Riku to harvest the Little Star into Cosmos Capsule and assumed Acro Smasher for the first time, ending the conflict with no loses on both sides. After the battle, Takashi decided to retry his comedian career while Moko becomes his straight man (tsukkomi). Although frequently captured by AIB, Moko's tendency to escape has the team settled down to just observing it from a safer distance.

A Lunah, also named Moko (モコ, Moko)[1], was the pet of a boy named Kanta. Kanta lost him and went to EGIS for help. While the other members dismissed him, Hiroyuki Kudo decided to help because he was reminded of Chibisuke. They went to look for Moko in an abandoned building, where Hiroyuki saw many other captured monsters. The two were apprehended by Chiburoids sent by Alien Chibull Mabuze, who contacted them via a hologram. He explained that he was capturing infant monsters in an attempt to create the ultimate creature, before he unleashed a Skull Gomora. Homare Soya suddenly appeared and fought the Chiburoids, buying enough time for Hiroyuki to release Moko.

"Its crying! The monster is crying in so much pain! Moko's telling you to stop bullying the monster!"

During Ultraman Taiga's battle against Skull Gomora, Moko sensed Skull Gomora's pain, and later sensed that Taiga's light had disappeared when he was corrupted by Ultraman Tregear. I Can't Hear Your Voice 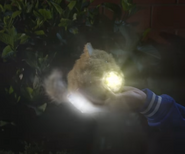 A Lunah named Moko alongside Hanejiro made an appearance in this show. Here they seem to be friends with each other. After Hanejiro was caught by Deban and Marluru, Moko revealed itself in front of them. While Deban got excited to live with them, Marluru prevented and only allowed Hanejiro and Moko to stay for 2 weeks.