TBA
Though two characters, they are both the Another Genesis counterparts to Ultraman Cosmos. They exists as opposites of each other, as they are manifestations of opposing forces, yet the two cannot exist without the other.

Two beings representing Reason and Instinct, they are never far from the other, their shared desire is to be whole, a complete being, to that end they offer their power to any worthy being they meet, a choice between the Light of Reason or Instinct. However, the two can never stray from each other and thus even their mergers with others cannot complete them.

Sometime in the past they encountered Mirror Master and offered him a choice. The giant chose Corona, due to his nature as a spectral intelligence that relied on instinct and thus changing his physical nature and appearance. Later, Ultraman Tiga, a servant of the villain Mirror Master, chose Luna and turned to the side of good rebelling against his dark master. Some centuries afterwards they encountered Blast and offered him the same choice they offered everyone else. Unlike the others Blast choose both for he did not believe any being was devoid of either good or evil and the two got their wished and merged with him.

With Blast's seeming death at the hands of a possessed Ultraman, their fate is uncertain.

Luna and Corona looking at a defeated Blast. 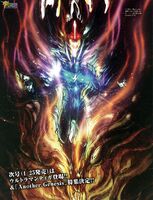 Retrieved from "https://ultra.fandom.com/wiki/Luna_and_Corona_(Another_Genesis)?oldid=511523"
Community content is available under CC-BY-SA unless otherwise noted.