None
Lovemos (ラブモス Rabumosu) (original name TM-39) is a popular TPC robot mascot. When possessed by an alien spirit, it went rogue and merged with most of TPC Mechas into Satan Lovemos (サタンラブモス Satan Rabumosu). It first appeared Ultraman Dyna episode 32 "The Singing Investigation Robot."

A small unmanned space probe created by TPC, Lovemos was designed for collecting samples from Saturn's moons and being the agency's new mascot. One day, Lovemos came across some ancient ruins and became possessed by an alien spirit. After causing an explosion and returning to Earth for repairs, Lovemos's possessor told everything once repairs were complete. Lovemos managed to escape Super GUTS's base and divert all of TPC's power to the TM-39 generator where it took over most of Super GUTS's vehicles to form a gigantic robot named Satan Lovemos. When Super GUTS  was unable to do anything to the vehicle fused robot, Shin Asuka turned into Ultraman Dyna. With Lovemos being under control by an alien spirit, Satan Lovemos, proved itself to be a wanton force of destruction by unleashing a couple of laser shots on a nearby building, completely obliterating it. When Super GUTS was unable to do anything to the vehicle fused robot, Shin turned into Ultraman Dyna. The hero attempted to use the Solgent Beam, but a single all out assault from Satan Lovemos surpassed it and knocked Dyna down. However, once Dyna went into Miracle Type, he proved to be too fast for Satan Lovemos to handle until it caught the hero and was about to use its chest drill on him. Just as Satan Lovemos was trying to kill Dyna, an alien trumpet found at the same ruins that had the alien spirit was used on Satan Lovemos and successfully restored Lovemos to normal after a few uses. Lovemos pleaded Dyna to kill him after all of his misdeeds when possessed but the hero refused and flew off. 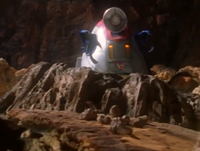 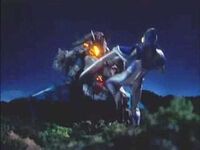 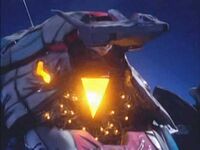 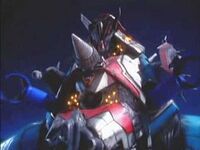 Add a photo to this gallery
Retrieved from "https://ultra.fandom.com/wiki/Lovemos?oldid=511517"
Community content is available under CC-BY-SA unless otherwise noted.