Allowing the user to experience Ultlive with selected Spark Dolls in a virtual world.
Receiving information on the Spark Doll.

The Livepad appeared sometime when Tomoya's drawings of kaiju materialized to real life as imitations of Spark Dolls under a mysterious force. Due to this, he collected the Spark Dolls in the Livepad and called out his friends to share the news. After having fun Ultlived into various monsters and aliens, they decided to Live into various Ultramen, with Hikaru selecting a copy of Ultraman Ginga, Misuzu picking a copy of Ultraman Taro, Tomoya amusingly picked the copy Ultraman, Kenta erroneously calling Ultraseven as "Ultraman Seven", and Chigusa with the copy of Ultraman Tiga. They were musing over the fact that all of them picked Ultra Warriors and was awkward to fight with each other, when a bug suddenly occurred, materializing copies of five evil Ultras: Chaos Ultraman, Chaosroid S, Chaosroid T, Chaosroid U and Evil Tiga. Soon, the teenagers found themselves getting beaten up by Evil Tiga and the Chaos Ultras. After the long battle, Ginga telepathically spoke to Hikaru, which helped the teenagers strengthen their courageous spirits and fired their selected Ultramen's finisher attacks onto the Evil Ultras as they vanished in defeat. They were suddenly awakened when the Power Source of the Livepad was disturbed by one of the Office Workers from Tomoya's Family Company, who clumsily tripped over the wires. 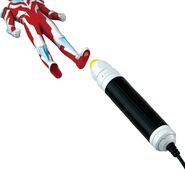 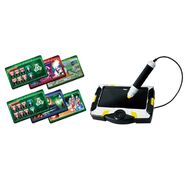