Ultraman Taro episode 2 "This Time It's Mother of Ultra"

Live King (ライブキング Raibu Kingu) was a monster that appeared in episodes 2 and 3 of Ultraman Taro. The third Super Ability Monster to emerge, Live King appeared shortly after the awakening of Cosmo Liquid. The two monsters ferociously clashed, and even though Ultraman Taro managed to defeat Live King by blowing his body apart with his Strium Beam, the pieces soon reformed in the presence of oxygen. Eventually, Live King was finally brought down in a climactic battle against Mother of Ultra and Taro, who simultaneously blew him to pieces in the vacuum of space, where the lack of oxygen would keep him from reforming, seemingly for good.

Shortly after Cosmo Liquid awakened from his slumber, Live King awakened as well. He was found in a hole near the city by a group of children, who only noticed the giant’s breathing coming up from the hole and reported it to ZAT. During the battle with Cosmo Liquid, the monster stepped in Live King’s hole, causing the subterranean monster to try and devour him. When Cosmo Liquid turned into his liquid form to attempt escape from Ultraman Taro, he was eaten by Live King, awakening the monster.

The next day, a dog suffered the same fate, being eaten whole by Live King. Kotaro Higashi tried to rescue the dog but fell in as well, falling into Live King’s mouth as the monster awakened and rose from under the ground, with those inside him tickling him. ZAT quickly picked up on the monster and realized there was someone inside the monster, then discovered it was their teammate. ZAT had to figure out a way to stop Live King without killing Kotaro and dog trapped inside. They decided to use a harpoon, the puncture causing fluid to spurt out of Live King but it failed to free Kotaro and succeeded in freeing Cosmo Liquid from inside Live King.

The newly reformed Cosmo Liquid assaulted Live King, sparking a melee between the two. During the brawl, a boy flew a model airplane down Live King’s nostril, causing him to sneeze but he then assaulted Cosmo Liquid with his flames. But as the battle raged on, nether gaining a decisive advantage. The rest of ZAT arrived, dropping sneezing powder on the two, sending them into sneezing fits in an attempt to free the trapped Kotaro and the dog, and thanks to Cosmo Liquid hitting Live King in the stomach, Kotaro and the dog were freed and an all out attack was launched but did no good as the two Kaiju began attacking the city.

Ultraman Taro was soon summoned and attacked both Kaiju but Cosmo Liquid managed to wrap his tongue around Taro's throat, gaining the monsters the upper hand and Live King severely injured Taro‘s arm. Taro then managed to dodge and freeze both kaiju, and after Cosmo Liquid was destroyed by ZAT shattering him, Taro struck Live King with the Strium Beam, blowing him to bits and seemingly killing him. However, Live King was far from dead, later that day, his pieces began coming back together. A piece began consuming chickens and more were sighted moving all over the city, slowly beginning to reunite into Live King. ZAT went underground to investigate and soon heard the monsters disturbing laughter. Using a recording of the beast as well as livestock as bait, they tried to lure the seemingly invincible Kaiju into a trap. Live King seemed to fall into the trap, disturbing the livestock but the same dog from before and his owner complicated it right as the fully restored Live King erupted from underground. An all-out attack was launched and managed to wound the monster but it fell on top of Kotaro, trapping him and leaving him unable to transform.

Thankfully, the Mother of Ultra, arrived on the scene, forcing Live King off Kotaro. The Kaiju rose to its feet and attacked Kotaro, forcing him to summon Taro, despite having an injured arm from the original fight. Live King took advantage of the injury and hurt Taro’s arm further but his mother came to his aid, healing his arm. Now fully recovered, Taro quickly overpowered Live King and prepared to blast him with the Strium Beam again but a boy told it would be no use. Live King can reform again so with help from the Mother of Ultra, Taro carried Live King into space and released him before blasting him with the Strium Beam while the Mother of Ultra used the Mother Destruction Beam, blowing him apart but in the void of space, he couldn't come back together and reform, ending Live King's threat for good. 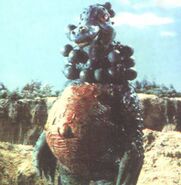 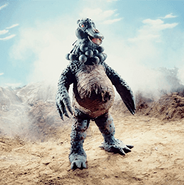 Figure of Live King, by Bullmark. 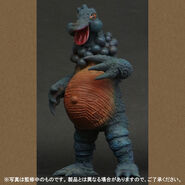 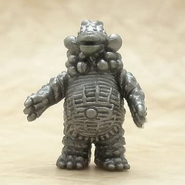