None
Litomalus[1] (リトマルス Ritomarusu) is a monster that appeared in the TV series, Ultraman Tiga. He appeared in episode 24.

Litomalus' name and motif is based on a litmus paper. The half word from the name, "Malus" is Latin for evil.

Litomalus was purposely designed after Twin Tail by the director and is also consciously themed after Shachihoko, a tiger-headed carp that is visible as roof ornaments in Japanese temples and castles.

Litomalus was a monster who had been created from built-up exhaust smoke from vehicles from over the decades. Since his birth the monster had been emitting the same type of smoke to make his lair more suitable for himself. The beast was discovered by four kids who witnessed Litomalus' poisonous smoke clouds destroying the lines between two towers. However because the children were notorious for being delinquents and troublemakers in their village, no one would believe them. Angered from not being trusted, the four kids went off to find the monster themselves and returned to the sight of the monsters lair. The kids then foolishly awakened the monster with some firecrackers and Litomalus proceeded to go on a rampage, destroying what was in his sights with his acid.

Once GUTS became aware of the monster's presence, Horii was quick to produce antidote to Litomalus's acid while the rest of GUTS managed to lure the monster away from the village he was in. When Litomalus found the kids that disturbed him, hiding inside of a GUTS vehicle, the beast tried to attack them, but was stopped by the lucky appearance of Ultraman Tiga. Once Tiga transformed into his Sky Type, Litomalus and the ultra were evenly matched in battle until Horii was able to finish the antidote, personally named "Horii's Special Antidote Missile", and fired it at the monster neutralizing his acid. With Litomalus now blue and powerless, Tiga was able to destroy him with the Ranbalt Light Bullet. 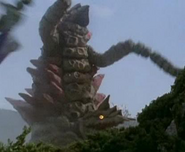