Jun and the others attend a performance by Akanuma the Magician During the act, a young girl named Lily is enclosed inside a box and her ghostly spirit appears in the air, separated from her body. At the conclusion, her body and spirit are rejoined and she emerges from the box, generating applause from the audience. Dr. Ichinotani conducts his own research on the subject and theorizes that the part of the body we identify as the soul may simply be a further extension of human existence. Using Ippei as his subject, Ichinotani employs a new invention to briefly separate Ippei's negative energy from his body, creating a ghostly double. Similarly, some aspect of Akanuma's hypnotic hold over Lily has triggered this same division in the child's body. Meanwhile, a series of bizarre accidents has been occurring in Tokyo, involving victims that have been frightened by the apparition of a little girl. It soon becomes apparent that the balance of Lily's body has been altered, allowing her spirit to roam freely at night. When Akanuma is unable to find his daughter, he realizes that Lily has set out to locate her wandering soul. She eventually comes in contact with her evil twin, who proceeds to lead her into the path of an oncoming train; Lily perceives the train's whistle to be her mother's voice from beyond the grave and continues to move towards it. Jun and Ippei arrive just in time to use Ichinotani's device to stabilize the balance between Lily's positive and negative energies and save the girl from the speeding train. Reunited with his daughter, Akanuma prepares a new act that won't place the child in danger.

Lily returned in Ultra Q: Dark Fantasy as a different incarnation of herself.

Trivial items such as toys and accessories were being stolen on a regular basis. As they were not high value goods the importance of the case was deemed low, however strange eyewitness testimony suggested that the items were being stolen by a ghost. Before long, Goichi and Ryo were staying in the neighborhood where the incidents were occurring, and they began to pay close attention to a lonely young girl named Lily. It seemed clear that the girl’s mother was desperately trying to hide something. Furthermore, as they hastened their investigation, they discovered that the girl’s heresiologist father had made Lily participate in a sense deprivation experiment using special mind separation equipment. Due to this, a different entity named Lily was created. The ghost attempted to kill the original body, Lily, by having her run over by a train, however her plan is stopped by Goichi and Ryo. After this, little by little, the entity is extinguished. 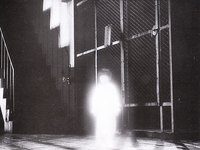 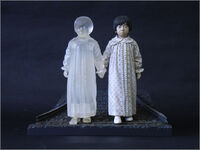 Lily (Middle picture) as she appears in Ultra Q: Dark Fantasy
Add a photo to this gallery
Retrieved from "https://ultra.fandom.com/wiki/Lily?oldid=531276"
Community content is available under CC-BY-SA unless otherwise noted.