None
Lilia (リリア Riria) was an illusion created by Psycho Mezard II, appearing as a human girl and based itself on Atsuko's long lost doll.

XIG operator Atsuko Sasaki kept having strange visions about a carousel with her childhood doll, Lilia, as a real person. Once a wormhole with a new Psycho Mezard II reared his head Team Lightning was sent in action. Before Team Lightning could do anything Atsuko began to hallucinate about her visions again and the wormhole released some sort of golden spores that slowed down Team Lightning's flight and made them incapable of firing, forcing them to retreat. The wormhole closed shortly after.

Georgie Leland and Gamu Takayama noticed Atsuko's strange behavior and convinced Team Lighting's leader, Kaijo Katsumi to try and find out what was wrong with her. Later that night XIG managed to track down Psycho Mezard's energy to a theme park and deployed Team Falcon. A new wormhole turned out to reveal a Wave Lifeform that was quickly shot down and formed into Psycho Mezard II. As Team Lighting attacked Psycho Mezard, the face on Psycho Mezard's stomach kept keeping Atsuko and Kaijo at bay, but their spirits were too much for the illusion to take hold as they soon broke free of the illusion prison as well as a poor woman controlled by the turtle-like monster. Ritsuko managed to free Atsuko by telling her that Lilia was not her friend but rather her long lost childhood doll, releasing Atsuko and letting Gaia finally able to terminate the kaiju.

Electrical Force Field
Add a photo to this gallery 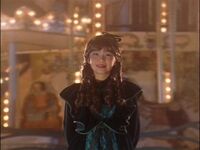 Add a photo to this gallery
Retrieved from "https://ultra.fandom.com/wiki/Lilia?oldid=511485"
Community content is available under CC-BY-SA unless otherwise noted.