Ultraman Wiki
Register
Don't have an account?
Sign In
Advertisement
in: Human Characters, Heroes, Other Heroes,
and 4 more

As a child, Lili grew up in the Gray Zone between the lower class Infernia and the upper class Rooks, which made her experience both sides of their conflict. She heard the stories of Ultraman from her mother, which provided her moral support after being drafted into the military. She is also friends with Lolo, who eventually ended up running a bakery once they reached adulthood. Lili decided to join the Riot Control unit to look for her missing parents, despite being a female and thus had much lower physical strength than the males of Planet Hus.

She encountered the human form of Ultraman Belial in a fight against the Infernia, where he punched a Galra that had been summoned out of a Battlenizer, thus saving both her and the girl that she tried to protect. Belial was then handed over to Lili's custody and bailed out from a detention center by Camearra. She noticed that there was a small light within Lili, and left.

A Geozark appeared out of nowhere at full size, and Lili tried to fight it, but failed. Seeing her actions enraged Belial, who transformed into his true form when his suppressors were released, killing the Geozark. Belial then attempted to attack Lili after he killed the monster but was saved at the last minute by Camearra, blocking his hand and knocking him out.

Lili was then taken to a house that Camearra to recover her energy, before she requested to follow Camearra out when Belial said he might want to kill her again. Carmearra then took her to the Battle Infernia arena where she earned money bu fighting battles to the death against various Kaiju, which is how she earned her money. She then took Lili to Lolo's shop to buy more bread, and coincidentally learned that her childhood friend had incurred massive debts after her father suddenly passed away.

While watching another one of Camearra's battles, she realized that she was fighting against Mace, Lolo's fiance, and got in between then to force them to stop since the loser would get dissected and have their body parts sold off. She got in the way of their battle to tell Mace that Camearra was never fighting seriously and she could never hope to defeat her, but he refused to stop, knocking Lili out, which enraged Camearra when he said he was fighting for his love. She transformed into a giant and forced Mace to stop fighting.

They were then approached by Evil Tiga, who brought them to a facility containing several Kaiju, who were almost at full size. Evil Tiga explained that he had been helping out the lower class Infernia in their war against the upper class Rooks by supplying them with Battlenizers in the first place, his ulterior motive was to gain power through them by imitating various devices containing Ultramen's powers, combined with the principles of Capsule Kaiju. All the other Battlenizers were sending data to his on, but using it for selfish purposes was tainting it with darkness. The revelations caused Lili to get angry, and got Belial excited instead, and he decided to provoke her into transforming so that he can fight her.

As Lili fought with Belial, she remembered how she would always get left behind, and how nobody wanted to look at her. They fired their beams at each other, but their fight was interrupted by a Melba sent by Hughes Ardy, the one who revived the Darkness Heels in the first place. He captured Lili and took her to his facility, where she had a dream of her mother, and as greeted by Hughes' assistants Haruka and Yasuka before Hughes arrived. He explained to her that he was studying the nature of "light" and "darkness" and that the V-race was a product of that to intentionally stir conflict between those in power and those without, getting the people to wage a "holy war" against the darkness. Hughes told Lili that her mother, Ahri Archive, once gave her life fighting on the front lines using a V-race, and then bonded with Ultra from Nebula M78. She discovered the true nature of the conflict and used the Ultra's powers to stop it momentarily, and brought a time of peace in which she raised Lili for a while and then disappeared. Hughes revealed to Lili that he abducted Ahri and fused her with a mound of flesh to continue his studies on the remnant light within her, greatly enraging Lili.

Dark Zagi and Jugglus Juggler then appeared, being called by Evil Tiga, breaking Lili out of the barrier she was encased in. Lili's commander, Silo, then transformed into a Kyrieloid and fought Juggler and Zagi before brandishing his Neo Battlenizer, summoning both Golza and Melba, forcing the Infernia forces to deploy their Kaiju as well. Hughes takes Lili and tells her that she inherited some of the power of light from her mother, before fusing her with the monster that had the powers of both light and darkness, Holy Demons, in the place of her mother.

Hughes then borrowed Silo's body, now evolved into Kyrieloid II, to speak with the Darkness Heels. He then sicced Holy Demons on them, and watched their battle unfold. Their attacks were ineffective as Holy Demons cancelled out darkness and light, and only a being with equal power could damage it. Belial and Camearra then convinced Lili to escape from Holy Demons, the latter making Lili realise that she was actually infatuated with Belial. She disappeared from Holy Demons and entered Belial's Inner Space, giving him the power of light and causing one of his eyes to glow blue. Hughes, still using the Kyrieloid's body, was left in utter disbelief at the turn of events, and Lili leaving Holy Demons has made it vulnerable to the power of darkness. The Darkness Heels put all their power together and fired their signature moves at the monster, destroying its body completely when Belial clawed his way through it. Hughes then escaped into space with Holy Demons' core with both light and darkness, trying to escape and bring it back to his lab to study it further. He, still in the Kyrieloid's body, was shot at and had the mixed power stolen from him by Ultraman Tregear.

Some time after the battle, both the Infernia and the Rooks have stopped fighting each other, and both Lili and Ahri are attempting to help them get along. The Darkness Heels bid farewell and leave the planet, but before they do, Ahri encourages Lili to admit her true feelings to Belial, and she gives him a kiss.

Lili's giant form and Belial in the cover of DARKNESS HEELS -Lili Chapter 1.[1] 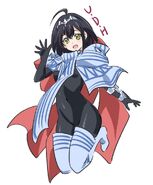 Lili in her civilian outfit by Shiro Tsunashima.[2]