Most Ultras in the Neo Frontier Space World

Still in use
A Light Crystal is a crystal located in the forehead of some Ultra Warriors from the Ultra-Ancient Giants of Light. Note that term 'Light Crystal' is not official but is used for easy understanding.

First seen on Ultraman Tiga, as the "Tiga Crystal" (ティガクリスタル Tiga Kurisutaru) is always located on the forehead of certain Ultras in the Neo Frontier Space World. Since Tiga gained the power to Type Change by absorbing the attacks of other Dark Ultras, it can be assumed his crystal regulates the powers within his body, altering the ratios to change his type. It is similar to the Beam Lamp seen on some Ultras, such as Ultraseven.

The light crystal seems to have direct access to an Ultra's Inner Light as Yanakargi was able to draw out Tiga's energy through his crystal instead of his Color Timer.

Two of Geed's game exclusive forms, Mugen Crosser and Mighty Trekker which utilizes the assets of Ultraman Tiga and Ultraman Dyna respectively, possess a light crystal on its forehand that looks similar to Dyna and Tiga's. 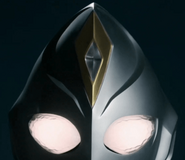 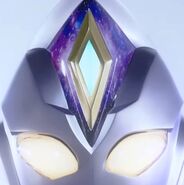 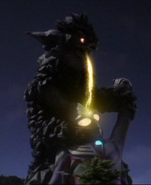