Active
The Lieflasher[1] (リーフラッシャー Rīfurasshā) is an object that appeared after episode 1 of Ultraman Dyna. The object served as Ultraman Dyna's transformation item in the later episodes and is used by Shin Asuka, Ultraman Dyna's human host, in times most urgent.

The Lieflasher was first released in Japan in conjunction with the first episode of Ultraman Dyna. The toy it self was roughly 6 inches tall, and was able to flick open with the press of a switch. However, the jewel itself emits a green light in a dance-like pattern instead of the purplish light seen in the TV series. 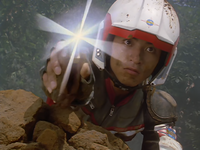 Asuka opens the Lieflasher for the first time. (Winning Shot)

Asuka uses the Lieflasher (Warriors of the Star of Light)