Ultra Galaxy Fight: The Destined Crossroad
Lidorias[1] (リドリアス Ridoriasu) is a monster that appeared in the TV series, Ultraman Cosmos. She appeared in episodes 1, 2, 7, 30, 32, 55, and 65. After being infected, she became Chaos Lidorias (カオスリドリアス Kaosu Ridoriasu). Following the original's appearance, numerous other Lidorias have appeared in the franchise, being native to both Planet Earth and Planet Juran.

Lidorias was a peaceful monster that lived on Earth that was acquainted with humanity as she was the first monster to live on Kaburaya Island, where she was given company by Musashi Haruno and the island's kind owner. Once Chaos Organism invaded Earth, the entity set its sights on Lidorias as their first host. Infecting Lidorias, the peaceful monster became more violent, attacking her visitors as she tried to fight Chaos Organism's influence. Unfortunately Chaos Organism succeeded in taking over Lidorias's mind and body, transforming her into Chaos Lidorias. Luckily Ultraman Cosmos arrived for the first time and fought Chaos Lidorias. After using the Reverspike on her after Lidorias fired her energy beam, Cosmos used his Luna Through Eye to see the Chaos Organism possessing Lidorias. He managed to purify the Chaos within Chaos Lidorias with the Luna Extract, transforming her back to her original peaceful form. Reunion With Light

Afterwards, Lidorias began to aid EYES and Musashi in the monster sighting which involved Chaos Organism. She reappeared in the 2nd episode where she saved Musashi and assisted EYES in battling against Golmede, but she could only do so much before Golmede gained the upper hand in combat until Cosmos arrived to stop Golmede himself. Chaos Header's Shadow

When Chaos Organism returned and took on the form of Chaos Header Mebut, Lidoras arrived to again save Musashi (whom had been separated from Cosmos after his previous battle with Chaos Header) and assisted EYES in stopping the Chaos threat yet again. When she was able to better resist the Chaos's influence, she was no match for Chaos Header Mebut's brute strength and was taken down with ease by the sadistic lifeform. Once Ultraman Cosmos and Musashi rejoined and acquired his new Eclipse Mode and was beating Chaos Header with ease, Chaos Header Mebut desperately used Lidoras as a shield to protect him from Cosmos. Thanks to Lidorias's already purifyed body, Cosmos's Cosmium Beam phased through Lidorias's body, unharming her (at the same time, removing the remains of the dark organism inside her body) but destroying Chaos Header Mebut. Eclipse

Lidoras (as well as Bolgils and Mogrudon,) would appear one last time in the series, helping Ultraman Cosmos and EYES in stopping Chaos Organism's final form: Chaos Darkness. When Ultraman Cosmos and Musashi were separated again, Lidorias, Bolgils, and Mogrudon used their cries to weaken Chaos Organism's long enough for Musashi and Cosmos to rejoin in order to purify Chaos once and for all. True Hero

Although not physically playing a role in the film, Musashi Haruno narrates a story to several children taking refuge at Team U's base of a long ago visit to Planet Juran, where several Lidorases, large and small, are seen along with several other monsters. Later in a post-credits scene, they are seen again on Juran as the monsters gather together to watch the sunset by a cliff. Ultraman Saga

Two Lidorias are seen passing by while Ultraman Cosmos is overseeing the climatic battle between Geed and Belial. The Symbol of Geed

Lidorias was suddenly attacked by a group of Absolutian warriors on Planet Juran, when Cosmos came to her aid. Though he at first attempted to reason with the Absolutians, he quickly began to fight back after they continued their assault, shifting into Corona, then Eclipse Mode to take them down one by one. As Cosmos readied his Cosmium Beam, Lidorias was able to free herself from the grasp of the Absolutians and stand in front of Cosmos, who fired his beam through her body and out the other side, simultaneously striking each of her would-be captors. Just before the raiders exploded, Cosmos rushed over to Lidorias and shielded the monster from the resultant explosion by deploying an energy shield behind her. Ultra Galaxy Fight: The Destined Crossroad 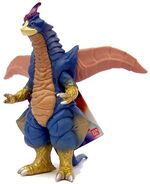 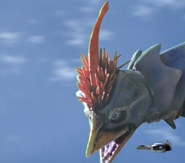 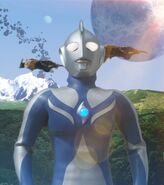 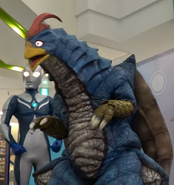