Ultra Galaxy Fight: The Absolute Conspiracy Chapter 1: "The Beginning"
Leugocyte[1][2][3] (ルーゴサイト Rūgosaito) is a Kaiju that debuted in Ultraman R/B, and serves as the final antagonist of the series. Originally a benevolent gaseous organism, it was corrupted and became a planet eater which eventually materialized as a dragon-like Kaiju on Earth.

Befitting its origin, Leugocyte's name is one kana away from the Japanese transliteration of Leukocyte (ルーコサイト Rūkosaito), the technical term for white blood cells. Additionally its behavior in eating non harmful planets is a sinister version of phagocytosis.

Leugocyte was originally a Space Leukocyte (宇宙の白血球 Uchū no Hakkekkyū) that eradicated the adverse effects of space until a certain mask-wearing blue Ultraman rewrote its genetic information, making it go rogue and destroy countless planets.

The Blue-Eyed Girl Whose Name is Gray

It approached Urban Planet Nepta (都市惑星ネプタ Toshi Wakusei Neputa), where the siblings Rosso, Blu and Grigio were expecting it after being called to go there by the Voice of Light of Planet O-50. They planned to use their Gyros to turn Leugocyte into a solid form before they can defeat it. However, the conversion process was incomplete and Leugocyte was stuck in an intermediate form, causing destruction to the planet. Blu attacked and Rosso and Grigio followed. The brothers manage to freeze Leugocyte using a combination of the powers of Water and Wind, but it broke free and returned to its gaseous state. In their battle, Leugocyte demonstrated enough power to turn Grigio Regina back into Grigio King and then Bone, and the fight caused a wormhole to be opened, throwing them to the space near Planet Earth. Leugocyte intended to absorb Earth's life energy and then destroy it, and then fired a finisher beam at Rosso and Blu, who lost the beam lock but managed to drive Leugocyte back. Unfortunately, the three siblings fell down to Earth as the Ayaka Star, and the brothers died, scattering into R/B Crystals. Ultraman R/B Novel: The Blue-Eyed Girl Whose Name is Gray

As Aizen Tech detected that Leugocyte would be returning to Earth, Saki planned to turn the planet into a massive bomb in an attempt to destroy the powerful monster. Everyone Is Friends [5] Having returned to Earth in present times, Mio Minato succeeded in imprisoning Leugocyte into a R/B Crystal, using equipment from Aizen Tech and the three Gyros. She later wanted to have the R/B Crystal thrown into the dimension she was trapped in for the past 15 years. However, Saki claimed the crystal after taking back her Gyro, closing the portal and stating that Mio's way is not the solution in stopping Leugocyte. After Saki defeated Ultraman Ruebe as Grigio Regina, Leugocyte's R/B Crystal activated itself, cancelling out her transformation and assuming its Kaiju form via Saki's Gyro. The Crystal of Destruction

Leugocyte proceeded to destroy everything in its path until Grigio Regina reappeared. Saki tried to stall Leugocyte until the Ray Energy gathered at the Aizen Tech premises, while Leugocyte withstood all her attacks. Once that happened, a barrier was placed around Aizen Tech to prevent Leugocyte from escaping. The Aizen Tech building's Monster Restraint System was also fired at it, but Leugocyte shrugged it off and used its tentacles to cut off the part of the tower that fired the beam. Preparing to finish off Grigio Regina, Leugocyte fired the Genesis Requiem, which was blocked by Rosso and Blu, who appeared and fired their signature Ultra Beams to counter it. Leugocyte fired yet another beam and struck Grigio Regina, who defended the brothers after being reminded of what they did for her 1300 years ago. Saki passed her Gyro to Asahi Minato and died. I Am Happy

Rosso and Blu then charged in fighting and transformed into Ruebe. During the battle, electrical equipment was damaged and the barrier around Aizen Tech was shut down. Just as Rosso and Blu were about to be finished off by Leugocyte, Mio was reminded of what she saw in the other dimension and cut off their transformation by locking her sons' Gyros. The Aizen Tech tower fired another beam that momentarily stunned it. Meanwhile, Mio prepared the final step of her plan, which was to pull the entirety of the Aizen Tech premises along with Leugocyte and herself into a giant portal to the other dimension.

After a talk among the Minato family, the brothers transform once more. Rosso, Blu and later on Ruebe fought well, convincing Mio to stop and believe in her sons. Despite that, Ruebe's power was not enough and was almost defeated, until Asahi realized what she truly is and transformed into the Makoto Crystal. With a final beam lock between the Genesis Requiem and the Shin Vortex Buster. Ruebe's beam won out and shot through the monster, and Leugocyte was finally put to an end. Home of Sunrise

Absolute Tartarus managed to acquire Leugocyte during his manipulation of the timeline. The Appearance It appeared and began attacking Planet Kanon while Sora and Yullian were on a diplomatic mission to the planet; though Sora was able to protect Yullian and herself against Leugocyte with her Shield Fleur, the two were still in grave danger. Fortunately, Ultraman 80 arrived and mounted a counterattack, driving Leugocyte away. The three Ultras then returned to the Land of Light to inform the Inter Galactic Defense Force of what they had seen. 80 gathered a strike force consisting of himself, Ultraman Neos and Ultraseven 21 to track down Leugocyte, fighting it on Planet Feed. Suddenly, Absolute Tartarus appeared with Reibatos, getting the latter to revive a Gymaira to interfere with the battle. The Ultra Heroes were in a tight spot until Ultraman Cosmos and Ultraman Justice arrived, giving 80 an opportunity to finish off Gymaira and return to helping the others fight Leugocyte. The beast was eventually defeated at the hands of the five warriors firing their signature beams at it. The Beginning

Gas Form
Leugocyte's original appearance, being naturally a gas-like lifeform and can neither be attacked nor captured easily.

Genesis Requiem
Monster Form
Leugocyte's dragon-like form, which resulted from the power of the three Gyros compressing its previous form. 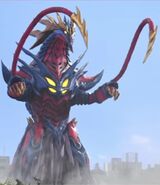