Return of Ultraman episode 34 "The Life That Can't Be Forgiven"

Dr. Mizuno, a scientist that pushed the boundaries of biology and an old friend of Hideki Go, wanted to mix animal and plant DNA for science. The result was the monster Leogon, who was born from an egg in his laboratory. However, something went wrong, as Leogon quickly escaped and grew from two feet long to the size of a rhinoceros within a minute. MAT quickly tracked Leogon down to a lake where they attacked him. MAT did little except annoy the hybrid organism as his vines easily entangled them in midair. Hideki wanted to end the madness before someone was killed and quickly turned into Ultraman Jack. The two giants clashed, but Jack quickly outmatched Leogon and finished him off with the Ultra Spark, slicing him to pieces. The Life That Can't Be Forgiven 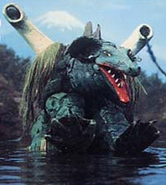 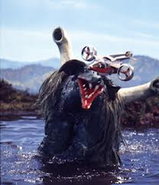 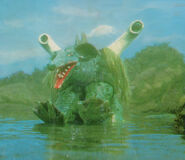 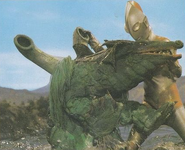