It was created with the smoke stacks of a factory's chimney and Leo's psychokinesis. The weapon was rendered unusable after Alien Kettle destroyed the tops of the weapon with his spear. One Man Covered in Mud

In the final episode of Sevenger Fight, Leo arrived to assist STORAGE's Sevenger (piloted by Yoko Nakashima) in against an army of monsters from his home series. As seen from his arrival, Leo utilized the Leo Nunchaku for the first time in 47 years. Sevenger Fight

The smoke stacks prior to Leo using them as weapons 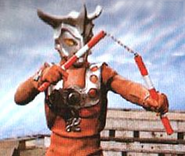 Alien Kettle uses his spear to destroy the Leo Nunchaku