ULTRAMAN Chapter 71
The Leo Brothers (レオ兄弟 Reo Kyōdai), namely Leo (レオ Reo) and Astra (アストラ Asutora), are characters in the ULTRAMAN manga series. They a pair of assassins employed by the Star Cluster Alliance, said to be even more skilled than Ace Killer.

The last survivors of Planet L77, the Leo Brothers were trained as assassins at a young age. When their planet was destroyed during their childhood, they found a place with the Star Cluster Alliance. Though some members of the council felt that the brothers were too uncontrollable, they performed their job as hitmen for many years.

The Leo Brothers made their first appearance on Earth upon being summoned by the Star Cluster Alliance. They were sent to Hong Kong to kill Agent Adad as well as the illegal aliens he was sheltering, for knowing too much about their secret plans. The brothers tracked down their target and engaged him in combat, managing to overpower the agent at first. However, Adad took a pill and transformed into a massive, hulking version of himself. Adad's increased power forced the brothers to revert to their true forms, where they managed to injure their target. Despite this, Adad's friend Sam rushed to his defense and attempted to shoot Astra.

Before the brothers could kill Sam, Dan Moroboshi appeared with Windom. Angered, Astra charged Windam, but was shot down and incapacitated by the robot. Adad regenerated from his injuries as Leo and Moroboshi traded threats, preparing to battle. Moroboshi, fueled by vengeance after his experiences in New York, was merciless against them and extorted them for information by holding Astra hostage. They were unprepared for the sudden emergence of Nova, sent by the Star Cluster Alliance to dispose of everyone involved.

Leo begged for Moroboshi to at least spare Astra as he was the only family he had left. Having a change of heart after being reminded of Rei, Moroboshi let Astra loose and they fought Nova together with Shinjiro Hayata as backup, managing to kill it by blasting its head with two Spacium Beams. The Leo Brothers then pledged their allegiance to Moroboshi for helping them.

Soon, the Leo Brothers revealed to the SSSP that the Star Cluster Alliance's speech about the Space Contraction Phenomenon was nothing more than a lie, and their true motives involved revenge against the Ultra race, seeing them as vigilantes who impose their sense of order upon other species, eliminating those who did not comply. These revelations shook the SSSP members, especially Shinjiro.

They were later sent out to help Seiji Hokuto and Taro fight against two Alien Zarab impostors who were imitating Moroboshi and Shin Hayata to cause destruction and defame the name of Ultraman.

Leo Brothers in ULTRAMAN: BE ULTRA 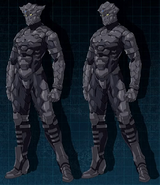