Lend Me The Pigeon

Lend Me The Pigeon is the 18th episode of Ultraman Ace. 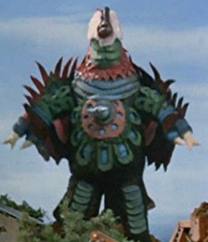 Yapool obtains a boy's homing pigeon, Kajiro, and transforms it into his newest Choju creation, Black Pigeon. The gigantic bird Choju rampages through the city, until TAC confront it. Yapool appears to be angry that his creation is destroying the city without any of his demands, and commands it to listen to his orders, and recalls the new Choju back to his own dimension. Later, Kajiro's owner calls for his avian pet, and Black Pigeon returns from Yapool's dimension, attracted by the boy's Pigeon whistle. However, the monster begins to destroy the city again, forcing Hokuto and Minami to transform into Ace so they can fight Black Pigeon. At first, Black Pigeon clearly has the upper hand, beating Ace into submission with its chest spike and spewing fire and regurgitation fluid over him. Black Pigeon even picked up a skyscraper and dropped it on Ace. As Ace's Colour Timer began to blink, the child called Black Pigeon with his Pigeon Whistle again, seemingly leaving Black Pigeon defenceless as he listened to the sound. Ace shot his Metallium Ray at Black Pigeon. A few moments passed, before Black Pigeon reflected the beam back at Ace, and the fight was resumed! After another fray, leaving Ace beaten down and almost drained completely of Energy, the Pigeon Whistle was used once more. Black Pigeon stands to attention, but lets his guard down, and Ace manages to defeat the beast before flying off.

After Black Pigeon dies, it turns back into Kajiro, who also dies. TAC hold a funeral for the pigeon, with the boy attending, who covers the dead bird in a white cloth.

2010 Release
Add a photo to this gallery
Retrieved from "https://ultra.fandom.com/wiki/Lend_Me_the_Pigeon?oldid=393975"
Community content is available under CC-BY-SA unless otherwise noted.