Leilons (レイロンス Reironsu) is a monster that appeared in the TV series, Ultraman Tiga. He appeared in episode 12.

Leilons was a sea creature that mutated into a monster from radioactivity from human testing affecting its resting place. Once Leilons was created it began to rampage at an oil plant in the middle of the ocean. GUTS quickly arrived on the scene and while they managed to put out the fire for the plant, Leilons escaped underwater before GUTS to do any serious harm. Learning that Leilons was headed for land to continue its rampage, GUTS was sent back into action once Leilons resurfaced from the sea. Despite their attacks on the monster, Leilons continued to evade their more powerful attacks by hiding underwater.

Once reaching close enough towards land, Leilons burrowed underground and emerged on land, attacking an aquatic research facility. Finally, Daigo transformed into Ultraman Tiga and battled the monster himself. Leilons proved to be a tough opponent as his hide was tough enough to resist most of Tiga's punches and not only that but his trickery involving his water stream to annoy and distract Tiga. Ultraman Tiga transformed into his Power Type, but all the same Leilons continued using his trickery to his advantage to outsmart and humiliate the Ultra long enough for his Color Timer to blink, all while laughing at the Ultra's dilemma. Tiga, having enough of this and with his Color Timer starting to blink then used his Miracle Balloon Beam encasing Leilons inside of a gigantic bubble. Then cracking his knuckles with vengeful intentions, Tiga walked forward and punched the giant bubble sending Leilons flying. Finally Tiga was able to use the Deracium Beam Torrent to reduce Leilons into a droplet of water, which then fell into the ocean, ending Leilons's threat. 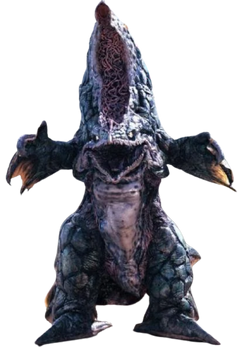 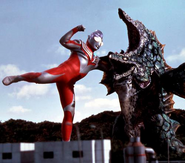 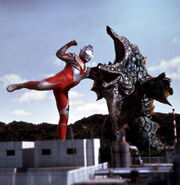 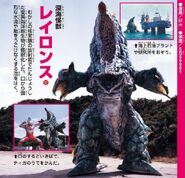