Legionoids are one of the group of grunts in Kaiser Belial's galactic empire. They are numerous in number and are built for separate terrain locations.

The first batch of Legionoids revealed were Alphas, who were sent to harvest the Planet Esmeralda for emeralds for Ultraman Belial. Run and Nao, two brothers and rebels, tried to fend off the batch of Legionoids but were quickly overpowered and endangered by a newly-revealed volcano. Ultraman Zero arrives in time to save them, merge with Run, and destroy a few threatening Legionoids, but is forced to flee into hiding with Nao when his strength is spent.

After meeting and befriending Princess Emerana, Jean-Bot, Glenfire and the Pirates of Flames, the group is ambushed by a massive squadron of Legionoid Betas, lead by one of Kaiser Belial's generals: Darkgone. With the heroes outnumbered by the mass quantities of Legionoids, Glenfire saves Ultraman Zero and company by agitating the Space Nitromethane Sea, which manages to destroy Darkgone's squadron of Legionoid Betas, but Darkgone himself escapes.

During the film's climax, when Arch Belial is preoccupied with the heroes, Glenfire brings along the Pirates of Flame, as well as the Planet of Mirrors's army and Esmeralda's Royal Guard. The combined forces of each planet's army manage to fend off the vast armies of Legionoids. Ultimately after Arch Belial's death, Ultimate Zero uses his remaining power to destroy his ship, taking a vast majority of Legionoids with it.

In part one of the gaiden, the first Legionoid to be seen is a Legionoid Beta, who is attacking a defenseless Princess Emerana. Rei and Hyuga of ZAP SPACY arrive and Rei saves Emerana by calling out Gomora. Gomora easily pummels the Legionoid and eventually destroys it with his Super Oscillatory Wave.

In part two of the gaiden, it is revealed that an entire army of mass Legionoids, Alpha and Beta types, have been created by Beatstar in his plans for Universal Conquest. Ultimately once Beatstar was destroyed, the Legionoid armies were destroyed in the planet's destruction. Ultraman Zero Gaiden: Killer the Beatstar

Legionoids reappeared in the film.

Early in the film, a leftover squadron of Legionoids (both Alpha and Beta) were seen attacking Ultraman Zero on an asteroid belt. Fortunately, Ultraman Zero managed to destroy the squadron with ease. Ultraman Saga

A Dada stole the robot from Belial's forces and customized it as Legionoid Dada Customize (レギオノイドダダ・カスタマイズ Regionoido Dada Kasutamaizu) in an attempt to kill Kei Fukuide and take over the universe afterwards, explaining his intent to avenge his deceased comrades (including the one that Kei killed before). He summoned it while his target was vulnerable but was instead pursued by Ultraman Zero into space. The Ultra and robot fought before the former flew them both back to Earth, but fortunately for the robot, Zero reached his time limit as he hit the ground. Once again the robot targeted Kei, but ended up destroyed when the Alien Sturm summoned Zaigorg. Inheritor of the Dream

The last remnants of Belial's army, a platoon of Darklops' and Legionoids, were reawakened among the ruins of their fallen empire, reacting to the presence of their leader's fragmented remains, the Devil Splinters. Ultraman X, Ultraman Geed and Ultraman Titas arrived to destroy them. They soon found themselves overwhelmed by the volume of units remaining, before Ultraman Z arrived to help them. The four disposed of the robots, finally ridding the universe of the last of the empire.

Leo and Zero prepare to fight an army of Legionoids 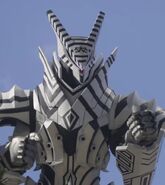 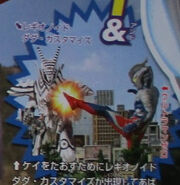