Emiko hears of an amazing cleaning shop, but cannot get anybody to talk to her, as the owner is seemingly shy. Other customers know that Burezaren is a monster, who walks about town shopping and receiving clothes to be washed. It never responds to questions, and simply walks wherever it wants to go. However, it is seen by men in suits and sunglasses...

An old man gets a shirt to the monster which belonged to his wife, whom he planned to go on a journey with. Later, Burezaren cleans the clothes by spitting a strange substance onto them which automatically cleans and folds them. He then returns the clothes. Emiko gets them, but cannot get the kaiju to receive anything in return. It stumps off as usual. However, when he cleans an entire bathhouse, some children see his process. They later sneak into his shop and spill soda on some of the clean clothes, including the shirt. The customer is infuriated.

His wife dies, but Burezaren goes to his house and gives him the recleaned shirt. Meanwhile, Emiko shows off her newly cleaned dress and reveals that Brethren Cleaning will go nationwide. Then a state official Burezaren to clean the entire earth of pollution and other such things. He then cleans the world. 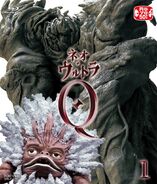 Blu-Ray Release
Add a photo to this gallery
Retrieved from "https://ultra.fandom.com/wiki/Laundry_Day?oldid=500132"
Community content is available under CC-BY-SA unless otherwise noted.