Monarchy
The Land of Light (光の国 Hikari no Kuni), also known as The Ultra Star (ウルトラの星 Urutora no Hoshi) or the Land of Ultra (ウルトラの国 Urutora no Kuni), is the home world of the Ultras of Nebula M78. It is located 3 million light years away from Planet Earth, is 60 times the size of Earth, and has a population of over 18 billion.

The Land of Light is a clear, green planet, with over 300 cities, mostly composed of a reminiscent green crystal material, which reflect the light and heat from the Plasma Spark, lighting up the whole planet and providing the residents of the planet with a limitless supply of energy. The planet itself is sixty times the mass of Earth and surrounded by large floating landmasses circling its core which bears a resemblance to a galaxy. The light energy from the Plasma Spark is extremely powerful, and can harm non-Ultra beings (such as humans), because of this, the Ultras create a force field for guests, as the light is too dangerous for outsiders. If the Plasma Spark is removed from its stand, the Land of Light would immediately freeze from the lack of heat, freezing all Ultramen on the planet. If returned, however, the planet will return to its natural state and the Ultramen are reawakened from their slumber. It is unknown if this affects any other life forms, though aliens from other worlds (humans included) can survive the cold of the planet.

The Land of Light's moon is actually a prison, made by Ultraman King to seal the evil Ultraman Belial and other criminals from the Land of Light. It is unknown if the satellite still exists after Belial's escape.

Yullian is stated to be the "princess" of the Land of Light, though the extent of her political power is unknown as it is never seen exercised. Her status as a "princess" implies that her parents would be monarchy, though they are never shown or brought up, nor is their influence on the Land of Light and its politics. Father of Ultra seems to be a very important figure, next to only Ultraman King who, ironically, does not hold the position of king despite his name.

Two hundred and sixty thousand years before the time of ZAP SPACY, the Ultras were a race of human-like beings who lived in a peaceful technological utopia. Unfortunately, the peaceful society lived on a planet orbiting a red giant near the end of its life. Their sun died, with the Ultras' ancestors surviving only because of their advanced technology, but they were left in perpetual darkness without their sun. For an unknown amount of time, the planet's greatest scientific minds came together and eventually devised a replacement for their sun, the Plasma Spark. A tower was built so this artificial star could illuminate the planet, saving it and its people from freezing to death in the cold dark of space.

During work on the project, two of the workers were exposed to the Differator Rays (ディファレーター光線 Difarētā Kōsen) and transformed into silver beings. Upon study it was found that they were incredibly strong and generated natural steroids to enhance their strength, could fire energy beams from their hands and could change their sizes at will. The Elder who then ruled the planet decided that all of his people should gain these powers and the project continued. When activated, the planet was bathed in the Plasma Spark's light and its people were transformed. However the light also traveled beyond their planet, disrupting the natural flow of evolution and causing monsters to appear on nearby worlds. The people renamed their planet the Land of Light and soon their race became known as Ultramen by other species. As the Ultramen advanced they developed the Color Timer, which were attached only to those Ultras that left for deep space.

The people of the Land of Light had a strong cultural sense of justice and duty and so decided to use their great powers for the peace of the universe. The Ultras took to patrolling space, protecting planets by fighting invaders and monsters. However more belligerent races were opposed to these activities and became enemies of the Ultras' crusade against evil. Despite the many enemies they gained, the people of the Land of Light were only ever dealt serious blows twice in their long history as giants. The first was from a being called the Emperor and the second from one of their own named Belial. The first invasion was fought off and ended when Ken dueled and wounded the Emperor, as well as being wounded himself. The result of this was the formation of the Inter Galactic Defense Force as a proper organization with Ultraman Ken being its first captain. To commemorate this victory the Ultra Tower was constructed. The second threat was ended by Ultraman King who sealed Belial away in what come to be known as the Space Prison, which orbited the Land of Light like a moon.

The Land of Light, with their superscience, has been making advancements into multiversal research, which has allowed them to interact with Ultras from parallel worlds, send their own warriors to fight in other worlds, and even summon Ultras from other universes. However, this remarkable technology, developed by the planet's greatest scientists, has occasionally led to large-scale conflicts with other alien races who desire to use the technology for themselves; one such incident occurred after Hikari invented the Life Solidification Device, which could bring beings back from the dead; on Planet Bat, a civil war erupted as a result of its inhabitants' fury over the Ultras seemingly keeping this technology to themselves. This war concluded with the planet's Federal Army emerging as the victors, who immediately set to work enacting the Ultra Annihilation Project, an invasion of the Land of Light which Jack and other members of the Inter Galactic Defense Force successfully repelled.

At an unspecified point in the past, Dark Zagi, an evil being from another universe, tore through the dimensions and entered the Land of Light in the midst of his battle with the silver giant, Ultraman Noa. Noa and the Inter Galactic Defense Force joined forces to battle Zagi, and were eventually successful in expelling him from the planet and the universe, but Noa lost his true form during the battle, eventually becoming Ultraman the Next.

The Land of Light also faced a potential catastrophe at the hands of Alien Babarue when he stole the Ultra Key when disguised as Astra. Without the Key, the Ultra Planet reeled off course and headed straight to Earth, which would have destroyed both planets. The combined efforts of Ultraman King and the Leo Brothers helped to prevent the potential crisis.

In the novel series, Ultraman: Another Genesis, the Land of Light is known as the Kingdom of Light and appears to be ruled over by King from his own private planet. For crimes unspoken, Belial was sealed in the core of the planet by King. However a chance fluctuation in the mechanisms of his prison allowed for him to escape. The planet of Giants was destroyed, scattering its debris all over the universe. These shards possess the power of the 'Light of Nature' and have been shown doing several things...

Blast's shard is ripped out

A shard shining from Antlar's forehead

In the 2011 manga series ULTRAMAN, the Land of Light, with a history presumably similar to its main counterpart. Like their main counterparts, its people created an artificial sun which gave them powers gave them their Ultra forms and powers. However, the artificial sun went out of control which caused 80% of the 69 million planets in Nebula M78 to be destroyed including the Land of Light, which caused interstellar immigration in the universe, and caused a massive rift in space-time which is causing space to contract. This was later revealed to be a lie by the Star Cluster Alliance to justify isolating Nebula M78 from the rest of known space, due to the strained relationships between them and the Ultra Nation.

Through flashbacks in Ultraman's mind, the Land of Light was confirmed to exist, resembling the modern version of the live action series, complete with green crysal architecture. Contrary to the evolution brought about by the Plasma Spark, the evolution of Ultras in this continuity is heavily implied to be a response to the presence of kaiju and an understanding of what caused them to appear. Despite this, what looks to be the Plasma Spark Tower was seen in Ultraman's memories. 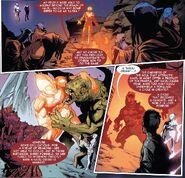 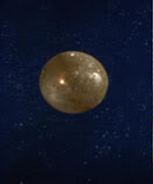 Mebius entering the Land of Light, here the floating continents can be seen clearly 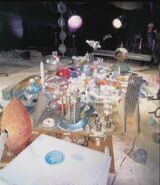 The model set of the Land of Light for Ultraman Taro. 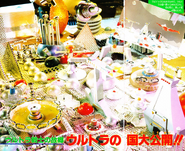