Ultraman Neos episode 8 "Revive the Earth - HEART To The South"

Lafreshion (ラフレシオン Rafureshion) was a monster that appeared in the 2000 series, Ultraman Neos. It appeared in episode 8.

Lafreshion was a giant creature created by the threat of Dark Matter. It was named after a creature in a book by a renowned scientist, who used the creature to represent man's need for change. It was found by Misuki, the daughter of the scientist, who found the creature as a small baby the same day her father died. Noting the similarity between it and the creature her father envision she named after the fictional beast. When it first appeared to the public, it began to purify the ocean of algae mutated by Dark Matter with his life ray, it was then that HEART and Ultraseven 21 became aware of Lafreshion's existence. Lafreshion later bursted from underground in Japan and turned a barren landscape into a grassy plan with his life ray before leaving. It was after this incident that HEART declared the monster had to be destroyed, it ray may rejuvenate plants, but it was poisonous to everything else but itself. Lafreshion was later found asleep under the house of Misuki but it violently awoke when she was arguing with a member of HEART. His fit of rage was more than an outburst, Lafreshion threw away a sense of companionship with Misuki and was to destroy her and the HEART member. At a valley however, Lafreshion burst out of the ground, looking for Misuki and the HEART member. A power line was in its way. Lafreshion swung its head and went back to walking towards the duo. Lafreshion found out the power line holder was still there. Lafreshion angrily unleashed its fireballs at it. The monster blasted a hill in anger as well. Lafreshion found the duo and its horn spewed out. Frills on the monster's arms and the back of its head unfolded. Misuki felt threatened by this and said the monster was not Lafreshion. The monster growled in anger. Misuki felt all hope was lost. Before any real damage could be done, Ultraman Neos arrived to stop Lafreshion, saving the two girls. The two giants clashed and after Lafreshion used the life ray Neos was weakened for a minute. Neos appeared to have the upper hand once he recovered until Lafreshion launched an assault of fire balls on him. With advice from Misuki about Lafreshion's horn, Neos quickly got up and sliced off the point on Lafreshion's horn with his right hand and gained the upper hand. The Neos Blade was quickly used on Lafreshion, killing the once proud monster. Mizuiki's father was given an honorable memorial later that day. 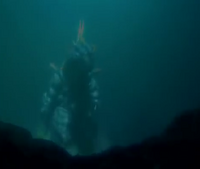 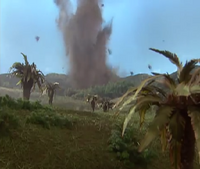 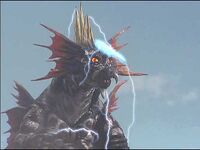 Lafreshion preparing to use its Rejuvenation Particles 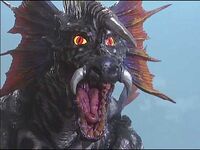 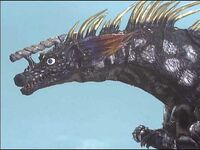 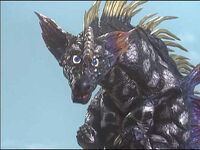 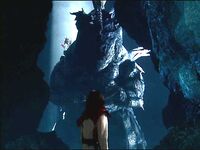 Lafreshion at its birth place 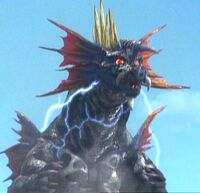