Early one morning three men were stranded in a forest when some sort of odd yellow gas appeared and choked them to death. As Jun went to investigate that night, he found that the human victims were dissolved except for their clothes. Suddenly Dark Faust appeared and as Jun turned into Ultraman Nexus, the Night Raiders arrived. As Faust left, Lafleya appeared from underground. A Chester fired a short, but Nexus stopped it, the gas Lafleya emitted was highly flammable and would destroy a town only eight kilometers away. After Nexus used the meta field to contain Lafleya the two began to battle, but Faust came from underground and made his dark field to complicate the situation. Nexus didn't give up and after a few uses of the Border-Ray Phaser, Faust retreated and Lafleya would appear again later. The next night, Lafleya returned once again from underground. Nexus quickly revealed himself and used the meta field to trap the space beast once again with Night Raiders using their new Chester combination, Strike Chester. Upon Strike Chester entering the field, Faust appeared once more and Nexus was outmatched once again. After the spider missiles failed to launch, all of Strike Chester's power was directed for one shot of the Strike Vanisher. Komon went with his gut and fired it on Lafleya. Just before impact, Nexus got away from Faust and Lafleya exploded with Faust feeling the effects. 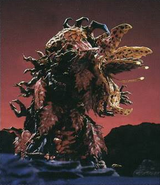 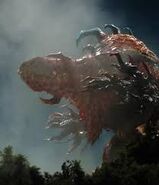 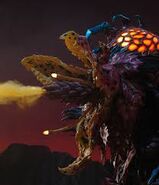 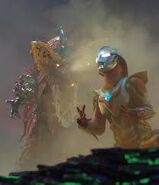