None
Kyuranos (キュラノス Kyuranosu) is a Kaiju that appeared in the TV series, Ultraman Tiga. Kyuranos appeared in episode 33 of the series.

Kyuranos was a Vampire Bat monster that had lived and originated in South America. Infecting several humans with a virus that transformed them into vampires, Kyuranos took his vampire vampires and fled to Japan to hide in darkness. After several sightings and attacks GUTS detected their presence, one girl was saved from a vampire attack and taken back to their base, but it turned out she was also a vampire sent to turn Captain Iruma and almost succeeded if not for Munakata. Following her they infiltrated their lair, an abandoned night club and fought with the vampires as Daigo was captured by Kyuranos himself with in sub-space within his coffin. Then another Vampire explained that Daigo was view as a threat because their bat god detected he had too much 'light' within him to ever be turned. The bat monster decided it was best to kill him and since he was in a realm of literal and spiritual darkness Daigo could not transform. Just as Kyuranos was about kill Daigo sunlight shined in upon him, killing the vampire and burning Kyuranos. Realizing his vampires minions were all killed by GUTS, Kyuranos covered the area in darkness and emerged from his lair to take care of GUTS himself. Luckily, Daigo escaped from Kyuranos's lair and transformed into Ultraman Tiga to confront the Vampire God himself. During the fight however, Kyuranos managed to bite Tiga and used his hypnotic powers to force the Ultra into damaging himself in their fight. With the assistance of a reporter friend of Munakata (whose pupil, with whom he had a paternal relationship, was one of Kyuranos's victims), Kyuranos's eyes were permanently blinded by GUTS's weapons, freeing Tiga from his control. Kyuranos tried to flee the fight with his life, but was stopped by Tiga's Ultra Fix which paralyzed him mid-flight and then destroyed by his Zeperion Beam, freeing Japan from his darkness.

Kyuranos reappeared in an Ultraman Orb stage show. He terrorized the stage with Giron Man after being accidentally summoned by a young Alien Hook. Luckily, Ultraman Orb appeared and fought the vampire monster, eventually defeating him with an Orb Kick. 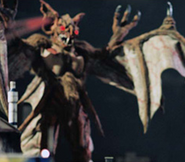