Kyrieloid (キリエロイド Kirieroido) is an alien that appeared in the TV series, Ultraman Tiga. They are also known as Kilalien, Kilielu, or Kille, as said in the English translation.

Kyrieloid was part of a race of devil-like creatures whom had viewed themselves as prophets for Mankind's future. When one of the devils took the body of a deceased man known as Mitsuo Itahashi, he began prophesizing a "renewal" of Earth by setting fire to those who were impure (by their standards.) All the while, they began to stalk Captain Iruma of GUTS in hopes of making her see that he and his race were the rightful "guardians" of Earth instead of Ultraman Tiga as the Kyrieloids have been inhabiting Earth much longer than the Ultramen had been. When Iruma refused to accept them as their new guardians, Kyrieloid left her to die in a building that was set to be destroyed by Kyrieloid's flames. Once the people were safety evacuated and Ultraman Tiga had arrived to save Iruma from the explosion, Kyrieloid revealed his true form after exposing himself to his own fiery energy, and began fighting Tiga. The two seemed evenly matched until Tiga transformed to Sky Type. While Kyrieloid's speed was impressive, Tiga's was greater and he began gaining the upper hand with a barrage of kicks until Kyrieloid began using his Creptic Ray to gain the advantage. Kyrieloid kept up his assault and managed to weaken Tiga, but GUTS and Iruma called support for Tiga, giving him new strength. Tiga then froze Kyrieloid with his Tiga Freezer attack before switching back to Multi Type and blowing Kyeloid to pieces with his Zepellion Ray.

Another alien of Kyrieloid's race would appear later on in episode 25 of Ultraman Tiga.

After the failure of the first Kyrieloid, several more prophets resurfaced and brainwashed a major population of people in Japan into believing that an Angel has come to Earth for their judgment. The Kyrieloid aliens also fooled the people into believing that Ultraman Tiga was the devil and so prepared to open up a gateway from Hell to Earth preparing to "purge" all those they saw were impure. Also unlike the previous Kyrieloid, several more of his race found and ambushed Daigo, pummeling him in hopes of making sure that he (as Tiga) would not interfere with their plans. Daigo however managed to survive their assault just as GUTS came to rescue him from them.

Once the gateway to Hell appeared in the sky, GUTS left to take care of the gateway while Daigo transformed into Ultraman Tiga to stop it from opening himself. These actions provoked several of the aliens to merge into another Kyrieloid. Still time however, Kyrieloid II was more prepared for Tiga in battle as it possessed the ability to transform its body into forms that mimicked Tiga's own Power and Sky Types. With his enhanced abilities, Tiga was outclassed by Kyrieloid II's powers and was put out of commission upon crashing to the ground from an air fight with Kyrieloid II in Sky Type Analogue and suddenly covered with darkness which emerges from the 'hell' door. Realizing that Tiga was the real hero, GUTS broadcasted to all the brainwashed citizens of Japan that Tiga was the true hero and that Kyrieloid II had been brainwashing everyone to think otherwise. Realizing the errors of their ways the population in the city crowded to Tiga's crash site and shined as much light onto the Ultra as much as there could, reviving Tiga in the process. Realizing Tiga was still alive, Kyrieloid II returned to the Earth and resumed battling Tiga, but Tiga's new consumption of light allowed him to manhandle Kyrieloid II with ease. Ultimately, Kyrieloid II was destroyed when Tiga hurled the demon towards the gateway to hell and blown up by Tiga's Zepellion Ray, ending the Kyrieloid's invasion on Earth.

After the revival of Gatanothor and Tiga's defeat, they appeared to Daigo in his crystal prison in the Tiga Statue to bad mouth him and gloat. They stated they were abandoning Earth and were leaving for another world.

Energy Blast
Add a photo to this gallery
Kyrieloid

Although Kyrieloid is what the Kyriel People chose to appear in later appearances, this form is simply a physical manifestation or as stated by Jun Yazumi, a "combat form".

Sacred Fire
Add a photo to this gallery
Kyrieloid II

Adaptation
Add a photo to this gallery
Chaos Kyrieloid

Chaos Kyrieloid is an exclusive powered up form of the original Kyrieloid from Ultraman Fighting Evolution Rebirth on PlayStation 2.

Blue Sacred Fire
Add a photo to this gallery

Kyrieloid appears in the Dark Horse Manga. Here, he is still an enemy of Tiga but his past seemed to be more related with the giant hero.

Kyrieloid appeared in episode 4 of the game's story mode. In the video game's story, he is once again seen battling Ultraman Tiga, but manages to retreat from the fight and hides underground. When Tiga appears underground in pursuit after the devil, he encounter injured Gomora (who had recently fought with Ultraman and lost his tail). After short battle, Tiga realize that Gomora doesn't want to fight and about to lets it leave. Then Kyrieloid returns to confront Tiga again, this time mutated by Chaos Organism into Chaos Kyrieloid (カオスキリエロイド Kaosu Kirieroido) and kills Gomora. This angered Tiga, who quickly defeats Chaos Kyrieloid despite his increased power.

A Kyrieloid, along with an Alien Temperor and Alien Hipporito, was one of the second team of aliens chosen to take down Dinosaur Tank. After a combination of his fireballs, Hipporito's antenna beams, and Temperor's electric beams, Kyrieloid didn't even make Dinosaur Tank dizzy. Kyrieloid and his team failed after they were shot by Dinosaur Tank's cannons and squashed like bugs. 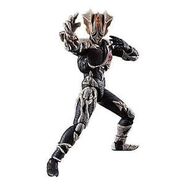 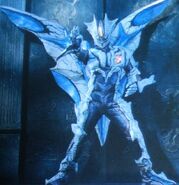 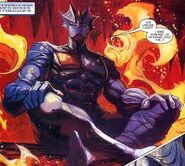 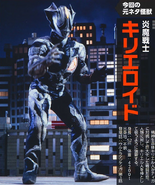 Kyrieloid in a stage show

Add a photo to this gallery
Retrieved from "https://ultra.fandom.com/wiki/Kyrieloid?oldid=437319"
Community content is available under CC-BY-SA unless otherwise noted.