Makiko Kuno
Kyoko Inamori (稲森京子 Inamori Kyōko) was a former member of Alchemy Stars and Hiroya Fujimiya's friend and first lover. She was also the first to know of Fujimiya's alter-ego as Ultraman Agul.

Back in the year 1996, she and other the Alchemy Stars scientist created Crisis, a future-predicting machine. The machine predicted that the Earth be destroyed by the Radical Destruction Bringer. However, it also predicts that mankind would be the cause of its destruction, thus leading Fujimiya and Inamori leaving the organization.

She was seen again when Fujimiya returned to the lab where he first merged with Agul to recharge his powers. At the same time, Gamu also paid a visit and Alguros, a Metal Organism almost killed her if not for Fujimiya/Agul saved her.

Following the death of Fujimiya's pet hamster, Lily in the hands of Alguros, she also had controlled a Gomenos in an attempt to prove Fujimiya's theories correct but her plan backfired and was killed by the monster when it rebelled against her control. Fujimiya avenged her death by killing Gomenos.

In episode 36, the Radical Destruction Bringer intruded Fujimiya's personal jet as a program and used Kyoko's appearance as an interface. Here, she tried to persuade Fujimiya into joining her but he refused and his jet's antivirus system expelled her.

Later, Queen Mezard tried to lure Fujimiya into joining her by creating an illusion of Kyoko Inamori. However, he managed to snapped away and killed the imposter with a pistol.

Kyoko in her lab coat 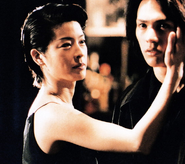