When a boy gave his prized stag beetle to a friend for one night, his friend's insect-hating mother put the creature out in the cold night, killing it. The boy was left distraught at the loss of his beloved insect and angry at his friend's negligence. He buried it at a hill with a pebble for a marker. Later that day the boy's friend came to the hill and found its grave. Curious and not knowing what it was, he dug up the tiny tomb to find an over-sized horn sticking from the earth. The stag beetle, now Kuwaganda from its owner's anger, rose from the ground and went on a rampage.

Kuwaganda began to attack the city. U.G.M fighter craft flew into action, pelting the insect with a barrage of firepower to no effect. Upon passing over its head, Takeshi’s jet was caught between its huge set of pincers. The monster began to swing the ship around before releasing it, sending the fighter hurtling toward the ground. Just as it hit, the human summoned Ultraman 80!

The red and silver giant attacked the creature, throwing it to the ground. The monster seemed to accept defeat, but when approached by the hero, Kuwaganda lashed out, sucker punching Ultraman 80. Falling on top of the hero and pummeling him, 80’s timer began to flash. As all looked grim for the hero, 80 figured the cause of the monster's rage and turned to the boy. He convinced him to let go of his anger and have his friend apologize to him. When that was done, 80 threw Kuwaganda off his back and began to beat down on it. Kuwaganda pleaded for its life and 80 obliged. Then Kuwaganda, now without a purpose, headed back for the hill and burrowed itself underground to return to its eternal rest. 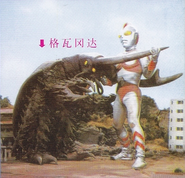 Add a photo to this gallery
Retrieved from "https://ultra.fandom.com/wiki/Kuwaganda?oldid=496308"
Community content is available under CC-BY-SA unless otherwise noted.