Kutuura (クトゥーラ, Kutuura) was a Space Beast that appeared in the Land of Death. He appears in episode 22 through 24 of Ultraman Nexus.

As Jun fled the scene, the source of the tentacles, Kutuura, made itself known and released a black gas that made Jun pass out. After analyzing the recent appearances of space beasts, the Night Raiders discovered Dark Mephisto left a code based on ancient Greek encryption that was soon decoded as a seventh seal opening at midnight like the Book of Revelation. Jun was in a factory when Kutuura's tentacles attacked, making him transform into Nexus.

As the hero followed the tentacles into a wormhole, Nexus found himself in a realm made by Mephisto called the Land of Death and Kutuura began to attack. Nexus easily beat down Kutuura until its tentacles got a hold of him and began to toss him around after creating explosions from its gas.

As the Night Raiders went through the gate at midnight, Nexus fell dead and his body was displayed as the Night Raiders entered the Land of Death. Kutuura ensnared the fighters with his tentacles and tossed them around, but the Night Raiders' shots forced it to let go and before long the Ultimate Vanisher was fired, reducing Kutuura to blue particles. 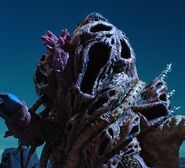 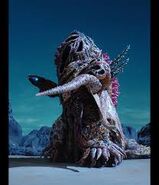