"Kam Tatahl Shadow. (May the Shadows rest in peace.)"

Hiroki Suzuki
Kuruto (クルト, Kuruto) was an Alien Shadow who infiltrated AIB and becomes a temporary partner of Moa Aizaki.

Kuruto was one of the Gabra Cano child soldiers, trained with iron fist by his drillmaster Zena. When Belial's attack left Planet Shadow uninhabitable, Kuruto was separated from his own people and resorted to invade other planets to restore his former homeworld's glory. To that end, he trains to change facial expressions on his human form so as to deceive others and infiltrate enemy groups.

On Earth, Kuruto and his two other subordinates reunite with Zena but disappointed when he turned down the offer to invade Earth. Seeing that his teacher had forsaken his pride as a Shadow, Kuruto and his men captured him as he infiltrate the AIB. Meeting Moa, Kuruto took over Zena's position as her partner as they went on undercover missions, among them apprehending an Alien Ckalutch.

"If you won't fight, then I will... I will restore glory to Planet Shadow!!"

After using multiple combinations, Kuruto was able to unlock and obtain the Zegun Retriever Device that Zena hid away, summoning the monster itself from the sea. After briefly fighting his former master, Kuruto controlled Zena from within and fought Ultraman Geed and Zero before Zegun was teleported away from its own power.

Both him and Moa were teleported to a remote forest and the two truly bonds for real with their harsh training by Zena. Facing his former drillmaster, Kuruto refused the offer of coexisting with other species, believing that he was too late to redeem himself and resume fighting as Zegun. Even the Ultras' pleading fail to reach him and this forced Geed and Zero to contain Zegun in a confinement barrier. Kuruto's last words were "Kam Tatahl Shadow" before approaching his death. What remains of him is the same device that he used to control Zegun as Zena reclaim it from the explosion. 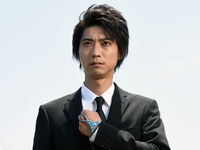