Return of Ultraman episode 43 "Demon God Barks on the Moon"

TBA
Kodaigon (コダイゴン, Kodaigon) is a golem Kaiju that was created by Alien Grotes which appeared in the TV series, Return of Ultraman. It first appeared in episode 43.

Kodaigon was originally a statue that resided in the middle of a shrine in a small village and was hailed as both their god and guardian. When Alien Grotes came to Earth in hopes of killing Captain Ibuki of MAT, Grotes stole the Kodaigon statue and injected it with a special serum of his race that brought the statue to life as Grote's juggernaut enforcer. Alien Grotes first unleashed Kodaigon onto the village during a worshipping ceremony, but was called back by Alien Grotes once Grotes was discovered by the captain. The next day, Alien Grotes summoned Kodaigon yet again, this time to attack the village directly, Grotes marching behind Kodaigon, using the statue as a walking shield to protect him. Even with the appearance of MAT to oppose the statue, Kodaigon's rock solid structure made their efforts futile to stop it. Just as Alien Grotes decided to join his enforcer in the destruction, Ultraman Jack appeared and proceeded to battle Kodaigon and his master. Again, Kodaigon's rock-hard structure made Jack's efforts in vain, as Kodaigon easily pushed through everything the Ultra had, while Grotes used his creation as his personal bodyguard, preventing Jack from getting close enough to harm him. However once Jack noticed that Kodaigon's life force was connected to Alien Grotes, Jack killed the alien while he was distracted by MAT and Kodaigon quickly reverted back into the statue he originally was.

Years after the trouble caused by Alien Grotes and the original Kodaigon, remnants of Grotes' serum that created the statue, known as "Grote's Cells," were found by an old man from a village after the cells were planned to be destroyed after being deemed unsafe. Once the cells found its way to an old man’s workshop, it began to infect his small toys, bringing them to life. Leading GUYS on a mission to locate the missing cells, they soon discovered the shop as they sold the living figurines. Despite recovering the vial, the container was dropped and the cells entered a small, hollow Ebisu statue.

Mirai immediately transformed into Ultraman Mebius as the other members of GUYS arrived in their Wing Fighters, blasting the living statue with firepower. Much like his predecessor, this new Kodaigon was impervious to damage thanks to its rock-hard structure and had no trouble in taking down Mebius with little to no problem. Even with the sudden arrival and assistance of Ultraman Hikari, the Ultras' attacks had little effect thanks to Kodaigon's strength and the assistance of Jiazaa on its part. However, the old shop owner revealed the statue had a crack in its leg, the only potential weakness in the sentient being. As Mebius managed to knock Kodaigon down with Jiazaa, Mebius and Hikari charged and fired their Mebium Shoot and Knight Shoot directly at the crack. With the Grotes Cells exposed and destroyed inside it, Kodaigon shrunk back down to its original form of a harmless shop statue.

Through unknown means, Kodaigon The Other's sea bream fell into Alien Barossa IV's collection of stolen weapons, alongside Gilfas's head blade and a Juran seed. Barossa IV used the sea bream in combat against Ultraman Trigger. Ultraman Z came to rescue him, but the bream bit Z too. Trigger was eventually able to disarm the weapon by throwing it out of the way. Inter Universe 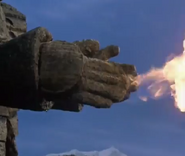 He first appeared in episode 62 of the series where he fought the violent, but heroic, Redman alone. They started out by charging at each other on a beach and then faced each other when they missed collision. Even though the golem did his best to hold his own, Kodaigon was no match for the alien hero's brutal beatdown tactics and soon, he was killed by a Red Chop to the arm.

Kodaigon reappeared in episode 69 where he started out the fight by surviving and taking Redman's Red Knife away from him. He used it against him until the hero managed to get it back, but it got knocked away. Soon afterwards, Garamon appeared to help the golem out. Together they managed to gain the other hand against Redman but the alien hero refused to give up and after a long brutal brawl, Kodaigon was killed by a judo throw to the ground, followed shortly by Garamon.

Koaidgon appeared in episode 96 where he appeared shortly at the end after Redman defeated Gomora and in the next episode, he charged towards Redman with his Red Knife and knocked the weapon away once he came close enough. After the usual fight consisting of punches, kicks, throws, grapples, Redman finally defeated Kodaigon by jumping up to the top of a cliff and then he performed his Red Kick to the monster's face, killing him in the process. The alien hero was soon faced by the monsters Draculas and Gudon.

In episode 130, Kodaigon fought Redman alone. The former dodged the latter's Red Arrow when he threw it at him. The two of them progressed down the hill and Kodaigon had the advantage over the alien hero as he countered everything he threw at him, including punches, kicks, throws, and grapples, with his own similar moveset. However, Redman didn't give up and eventually he managed to gain the upper hand over the stone monster. After throwing him one more time, Redman defeated Kodaigon with a Red Kick to the face.

Kodaigon reappeared in episode 133, where he teamed up with Sadola to battle Redman. At the start of the fight, the alien hero tricked the two monsters into running into each other but they avoided major damage by crossing their arms simultaneously when Redman threw two Red Knives at them. After that, the two of them gained the upper hand over Redman due to their well-coordinated teamwork and brute force, however, the latter didn't give up and eventually gained the upper hand back in battle. After he defeated Sadora, Redman defeated Kodaigon with a hard double kick to the face.

In episode 134, Kodaigon teamed up with Sadola, Zetton II, and Dorako to battle Redman. All four monsters confused the alien hero by jumping up and teleporting with each other and then teleported back into a horizontal line. Even though all four monsters held the upper hand against the alien hero for the majority of the fight, Redman persevered. In the end, after a long fight, he defeated all four monsters by throwing his Red Arrow at them from the top of a hill and they fell down due to the resulting explosion.

Kodaigon made his final appearance on the show in episode 135, in which he teamed up with Dorako to battle Redman. At the start of the fight, there would be an explosion every time either of them threw a punch at the other or just threw each other around. While the fight was evenly made in their favor, with both of them countering each other, Dorako suddenly appeared to help him. Redman threw his Red Knife at him, but the monster caught it and threw it back, only for the alien hero to clear the way in time and Kodaigon ended up getting hit by it. While the two monsters had the alien hero on the ropes, Redman didn't give up. Eventually, after he killed Dorako, he killed Kodaigon by stabbing him in the chest with his Red Arrow. 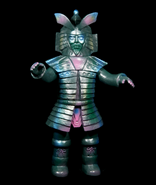 Figure of Kodaigon, by Bear Model. 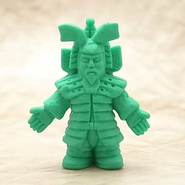 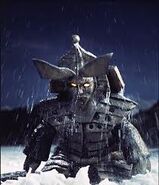 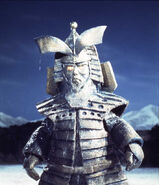 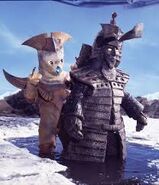 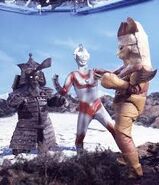 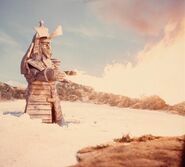 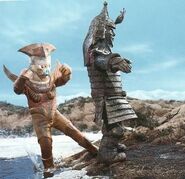 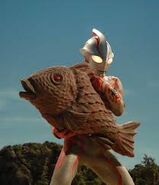 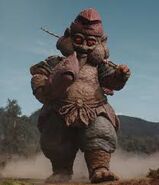 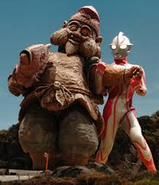 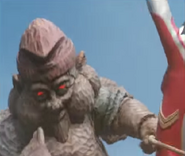 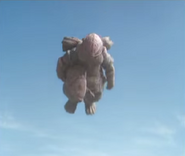 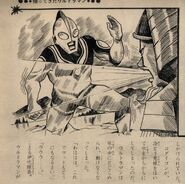 Picture story of 'Return of Ultraman' in 'Syogaku 4nensei' 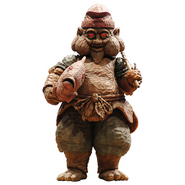 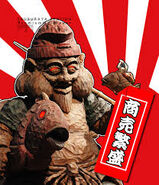