In use
The Knight Brace (ナイトブレス Naito Buresu) is Ultraman Hikari's transformation item and personal weapon. It is also used by Ultraman Mebius in two of his forms - Mebius Brave and Mebius Phoenix Brave - as a side weapon.

The creation of Ultraman King, the brace was given to Ultraman Hikari who came searching for the legendary giant for power. Hikari wanted to become stronger to stop the prophecy of Tsurugi which foretold the destruction of Arb, something he wished to stop. Given the Knight Brace, Hikari wielded it as Hunter Knight Tsurugi. After being freed of the armor of vengeance by his resurrection at the hands of Mother of Ultra, Hikari fought with Mebius to protect Earth. In time he left, leaving the brace to Mebius. In his pursuit of Alien Babarue, he returned to Earth after the galactic trickster and Mebius returned the device to him. 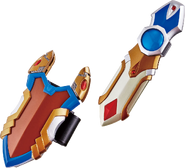