Instagram
Twitter
Kiyotaka Uji (宇治清高 Uji Kiyotaka) is a Japanese actor. He was once a talent agent from Stardust Promotion. He had the role as Fumihiro Nitta who is the Unicorn Zodiart from Kamen Rider Fourze and later the role as Sho, the Victorian host of Ultraman Victory in Ultraman Ginga S. He is also the voice actor for Ultraman Victory. 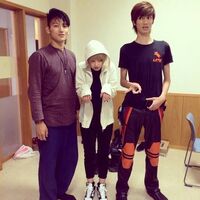 Add a photo to this gallery
Retrieved from "https://ultra.fandom.com/wiki/Kiyotaka_Uji?oldid=511343"
Community content is available under CC-BY-SA unless otherwise noted.