Kiyla (キーラ Kīra), also known as Keylla[1] is an alien Kaiju from the TV series, Ultraman. He appeared in episode 38.

The Planet Q was a new discovery and as a robotic probe looked for useable resources, the camera revealed a gigantic eye looking into the lens. A quick flash followed, blinding those that watched the screen. With a group of astronauts trapped on the planet of kaiju, the Science Patrol was dispatched. Upon arrival, the group witnessed a battle between Kiyla and Saigo. The wicked monster drove Saigo into full retreat, allowing Kiyla to wander the alien world without any fear.

As the Science Patrol continued to explore and accomplish their mission, Kiyla appeared before two of the teammates and blinded Arashi! While they made it back to their vehicle, Kiyla again appeared, blocking their path. The group ventured outside to combat the monster, but none of their attacks could even hurt it! As they retreated to the nearby rocket, Hayata summoned Ultraman to assure their safety.

The hero attacked the space insect, pummeling it with a flurry of strikes. Victory seemed assured for the hero, a blinding flash made the red and silver giant stagger! Unable to see, Ultraman was met with a relentless attack until his eyesight returned. When it did, the hero caught the alien beast with his Ultra Air Catch (V2) and floated it into the air, driving it off and exploding into the distance, allowing the Science Patrol to escape.

In episode 7, Kiyla's Spark Doll and many others are seen cheering on Ultraman Ginga as he fights Dark Galberos. It is likely that Kiyla returned to space in his original form after Ginga defeated Dark Lugiel. 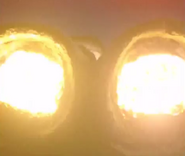 Tail Catch
Add a photo to this gallery

Kiyla reappeared in several episodes of the series Ultra Fight.

Bandai Kiyla Remake Figures
Add a photo to this gallery 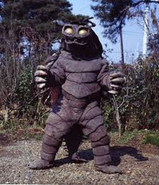 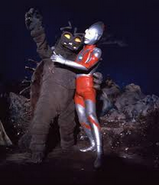 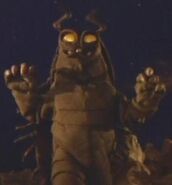 A defeated Kiyla thrown into space resulting in an explosion

Kiyla in He of the Sun

Retrieved from "https://ultra.fandom.com/wiki/Kiyla?oldid=496286"
Community content is available under CC-BY-SA unless otherwise noted.