Mirrorman episode 2 "The Invaders Are Next Door"

Kitty Fire (キティファイヤー Kiti Faiyā) was a Kaiju that appeared in the series, Mirrorman. She appeared in episodes 2, 6, and 15.

Possessing the corpse of a woman living in an apartment building, who witnessed one of the Invaders' UFO's. The Invaders had already turned the apartment into one of their base of operations, having many agents on the top floor. The last two human residents of the top floor where a pair of siblings name Reiko and Masahiko Ishi, who where close friends with the woman before Kitty Fire replaced her. Mashiko was working with SGM to develop a new radar system and was murdered by an Invaders' agent plcing a time bomb in his car. This event however lead to SGM having Yuki Nomura and Kyotaro Kagami visit Reiko, and witnessing the aftermath of the Invaders secretly destroying a police car.

SGM sent more agent to investigate the building after Kyotaro uncovered evidence that the Invaders where present in the apartment building. Kitty Fire then set the apartment on fire, but was later confronted by Mirrorman while trying to escape. The two then grew to giant size destroying the building and began to battle. After Mirrorman tackled Kitty Fire she tried to use her flames and Mirrorman killed her with the Mirror Knife. The Invaders Are Next Door

She appeared late at night but mysteriously disappeared at a corpse storage room of Toto Medical University. She revived a corpse and used a rifle to shoot at Kyotaro. Mirrorman's Father's keepsake pendant saved the life of Kyotaro.

Assassin invader shot at Kyotaro three times trying to hit him on the move in the car. However, he failed and to fled in a truck. SGM followed by car but they had disappeared. Dr. Mitarai advised not to overlap the same trap. The Invaders suddenly appeared in the back seat of the car and pointed the gun at him. The car burst into flames, Kitty fire emerging from within the flame. Kyotaro transformed into Mirrorman to battle her. Kitty Fire started blowing soap bubbles. Mirrorman defended himself with the Mirror knife. He then halted the soap bubbles using the Mirror halation. Then, he launched the slicer V and cut off Kitty Fire's arms. Green soap oozed from Kitty Fire's of face. A Graveyard in the Mirror

Kitty Fire appeared once again as Kitty Fire III (キティファイヤー二代目 Kiti Faiyā Nidaime) in episode 15 of Mirrorman, "The Mysterious Monster Screen". She was actually an illusion created by Jabala to scare the people.

Kitty Fire appeared in episodes 3 and 9 of Mirror Fight. Stock footage of her fights in Mirrorman were reused in this series. 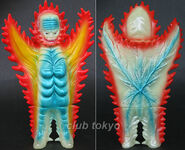 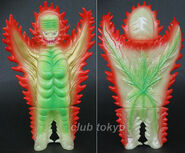 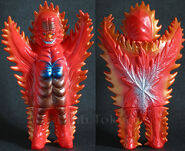 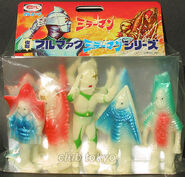 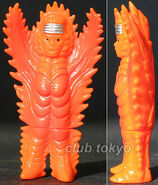 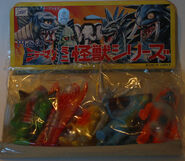 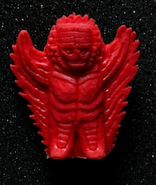 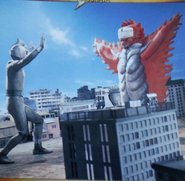 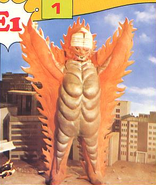